Offshore Wind Energy Market: Northern Europe and Germany have been the leaders in wind farms constructed offshore, but U.S. and China are gaining ground.

According to report by Global Market Insights Inc., the offshore energy market—windfarms constructed on bodies of water—will surpass $60 billion by 2024. The reason for the expected growth is the worldwide quest for more sustainable and cleaner energy sources. 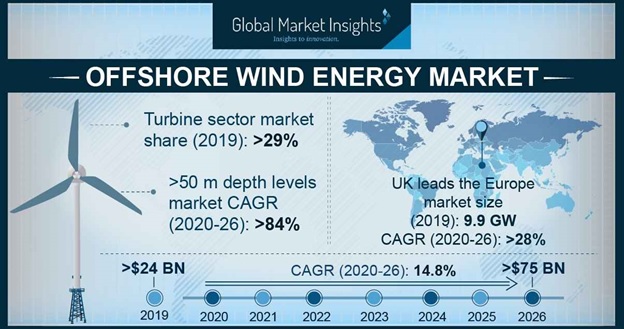 “In the current scenario, wind energy is considered among the mature energy sources, since its first deployment in Denmark,” said Ankit Gupta, who is the research manager for energy and power with Global Market Insights. “The Global Wind Energy Council in 2016 claimed that the unconventional energy system will be led by wind. Subject to the fact, offshore wind industry has been gaining momentum, as to contribute majorly in achieving renewable energy targets across the globe.”

But the U.K. and Germany are now facing some strong competition.

After the first offshore wind farm in North America was completed, the continent has been identified as one of the more lucrative markets. The Block Island Wind Farm offshore Rhode Island is projected to produce enough electricity to power over 17,000 homes.

India's largest oil and gas company Indian Oil Corporation Limited recently said that Iran could still invest in one of its subsidiaries for a refinery expansion project. Sanjiv Singh, chairman of Indian Oil stated that Iran has not ruled out its participation in the development at the Chennai Petr ...

Allete Clean Energy, a Minnesota-based independent power producer and supplier, has recently approved a new 5-year power sale agreement between its Viking wind farms in southern Minnesota and Xcel Energy, Inc., whose original 15-year PPAs will expire in December 2018. As per an official press rele ...

Some of the biggest energy & business groups in Australia have reportedly come together in an effort to urge the Australian government to forgo its Big Stick approach in the matter of energy legislation. Apparently, the businesses are warning the government that the divestiture powers it craves wo ...