Kuwait and Nigeria Will Be Growth Engines of LNG Industry in Middle East and Africa, Says GlobalData

Kuwait and Nigeria will contribute significantly to capacity growth in the Middle East and Africa's LNG industry between 2018 and 2022. Nigeria is set to have the highest liquefaction capacity additions while Kuwait and Turkey will have highest regasification capacity additions among all countries in the Middle East and Africa, according to GlobalData, a leading data and analytics company. 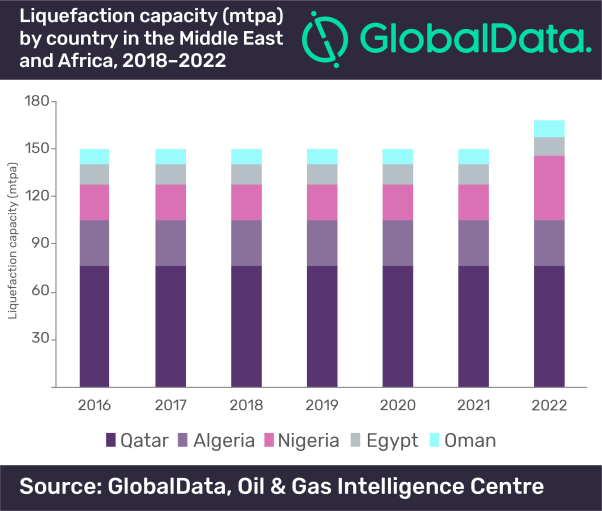 Soorya Tejomoortula, Oil & Gas Analyst at GlobalData, explains: “Nigeria is expanding its liquefaction capacity to capture increasing global demand of natural gas. The country aims to become one of the major suppliers of LNG globally.”

Kuwait will lead the Middle East and Africa with total additions of 1071 bcf. The country's regasification capacity will increase from 264.8 bcf in 2017 to 1,335.8 bcf in 2022 at an AAGR of 32.4%. The country is expected to spend around US$2.9bn on development of upcoming regasification terminals during the outlook period.

Tejomoortula adds: “Kuwait is increasing its LNG regasification capacity to meet its growing domestic power demand. The country is grappling with chronic electricity shortages, which is threatening its economic development. The new LNG terminal will also generate business opportunities to the local companies and helps in promoting industrial growth in the country.”

Turkey will be the next highest country in Middle East and Africa with planned regasification capacity additions of 392.7 bcf by 2022. The country is expected to spend roughly US$548.5m on the development of new regasification terminals.

Information based on GlobalData's report: LNG Industry Outlook in Middle East and Africa to 2022 – Capacity and Capital Expenditure Forecasts with Details of All Operating and Planned Terminals


New service from OilVoice
Trip Shepherd is for companies who need to track their staff in areas of risk.
It's free to use, so we invite you to try it.
KuwaitNigeriaGlobalDataMiddle EastAfricaLNGLiquified Natural Gas