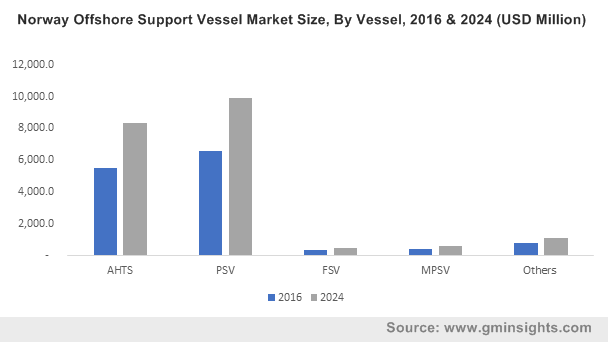 Offshore support vessel market encompasses an assortment of myriad vessel types designed to perform a plethora of tasks. Anchor handling tug supply (AHTS) vessels among these, apparently account for a major percentage of offshore support vessel industry share, in terms of demand, supply, and value, subject to the fact that the vessel is specifically demanded by oil rig operators for handling anchors, towing, and ensuring the supply of cargo, fuel, water and mud. ATHS vessels are also used for rescue and emergency response. In North America, AHTS vessels are particularly designed to handle the rough conditions of the North Sea. In 2017, the oil rig count in the U.S. has increased from 406 to 759, an 86.95% rise, that has increased the demand of AHTS vessels substantially, stimulating the overall offshore support vessel market.