Exploration is just beginning for this oil and gas E&P with large tracts of prime land in the Permian Basin in Texas. 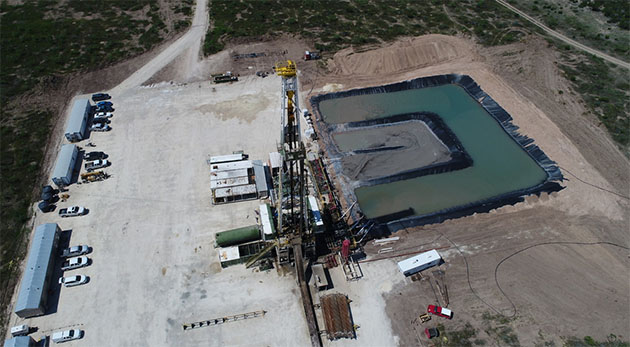 Torchlight Energy Resources Inc. (TRCH:NASDAQ), an oil and gas exploration and production (E&P) company with rights to property in the Midland Basin, the Delaware Basin and the Orogrande Basin, just released an update on its first horizontal well, reporting production of 465 barrels per day.

Torchlight reported that its first horizontal well in the Hazel Project, the Flying B Ranch #3, has "attained a highest measured production rate of 465 BOPD and 248 MCFPD of gas as the well continues to clean up with 45% of load water recovered." Torchlight also reported "continually improving oil cuts as high as 30% and over 12,000 barrels of oil produced thus far."

"The recent production rates are comparable to other Midland Basin Wolfcamp A wells with 5,000 foot Laterals and on par with Torchlight's expectations for the well," the company stated.

"We are pleased to demonstrate meaningful horizontal production in the Wolfcamp A section of our 12,000-acre lease," stated John Brda, CEO of Torchlight. "We expect that this asset will be developed employing extended laterals of up to 10,000 feet in length providing Torchlight with between 30 and 100 new Wolfcamp A well locations alone, depending on spacing. With only one productive horizontal bench of three we have seen and targeted in this field, our total number of supported horizontal locations could be well over 200 in total."

With rights to land in the Midland Basin ranging from $10,000 an acre to $40,000 and above, even at the lower end of the range, Torchlight's 9,600 acres would be worth $96 million, a figure much higher than the company's current market cap. This does not account for the company's other two properties, the 133,000-acre Orogrande property and the Delaware Basin property where Torchlight has 20 10,000-foot lateral locations.

Dallas Salazar, CEO of Atlas Consulting, told Streetwise Reports, "Torchlight's operational update is, in my opinion, the most meaningful in company history. With this update, confirming a prior update on Hazel Project Well results, Torchlight further validates its investment and operational thesis: that its ability to recognize anomalies in geology and its ability to utilize leading edge Frac Tech allow it to realize economics on what have been traditionally thought of as non-core assets."

"Further impressive, and further validating of both theses," Salazar stated, "Torchlight has completed its transformation from a minority working interest owner to a majority working interest non-operating E&P, something that is unprecedented for an E&P of its size and made further impressive given that the transformation has taken place in the single worst commodity crisis in the history of the Energy Complex. What Torchlight has done and the circumstances under which it has done it is nothing short of remarkable."

Torchlight noted in its update that the science that it gleans from its first horizontal well will inform future exploration in the area. Torchlight has drilled the Flying Ranch #4, and stated that it is "permitted, drilled and reached vertical total depth as outlined under the Company's lease requirements. Torchlight plans to continue to weigh the production data from the Flying B #3 before deciding on which zone to target for a horizontal objective in the well."

Torchlight also has a 67.75% working interest in the 133,000-acre Orogrande Project in Texas. Torchlight reported that "the University Founders A25H well has been spud and the Company is currently preparing to drill below intermediate casing at ~3,000 feet."

Salazar noted that Torchlight "can look to execute its multi-well, multi-play drilling program with confidence. Torchlight updated that its 133,000 acre Wildcat prospect, the Orogrande Project, has successfully been drilled through the geologically complex "top rock," with Torchlight utilizing leading-edge air drilling technology. After identifying at which depth to finish the horizontal portion of the drilling, Torchlight will again look to prove its thesis—only this time in a prospect field that has approximately one billion barrels of conceivably recoverable oil reserves. Ultimately, if Torchlight can prove its thesis in the Orogrande Project it will have wildcatted one of the largest shale discoveries in the history of the U.S."

"While there is still much work to be done, Torchlight now has a second data point which proves out its ability to identify, delineate, and successfully recover oil via abandoned, disregarded, or completely unproved plays. The question at Torchlight is no longer "can it prove its thesis" but "to what degree can it prove its thesis." Torchlight, definitively, is now the single most attractive oil-focused junior E&P in the Energy Complex," Salazar concluded.

Torchlight also recently announced that it has closed a Delaware Basin transaction with Greg McCabe and MECO IV, LLC, an independent, private E&P. Torchlight has received $6 million and "has received the Working Interest and Carry in the Winkler County project."

"We are happy to get this transaction closed," stated CEO Brda. "We look forward to working with MECO IV as the operator on the project and drilling some nice wells with them in an area that is seeing a lot of activity. In addition, the liquidity will be a huge help as we continue to develop the Hazel Project and the Orogrande Project."

Technical analyst Clive Maund on Dec. 7 in CliveMaund.com provided his chart analysis of Torchlight. He concluded that "Torchlight looks out of favor here and it is suspected to be at a cyclical low. Therefore [it's] rated a buy as any news out could drive it sharply higher—even if it doesn't break out of its large base pattern and only makes it back up to its highs earlier this year, it would result in good percentage gains from the current low price."

On Dec. 12, Maund noted that Torchlight has rallied 5.2%, "a modest gain so far, but don't be fooled by it closing well off its highs—it has broken out of its downtrend and the intraday rally yesterday served to drain off overhanging supply, clearing the way for further gains."