Intensity of U.S. Energy Use in Manufacturing Decreases as Output Outpaces Fuel Use 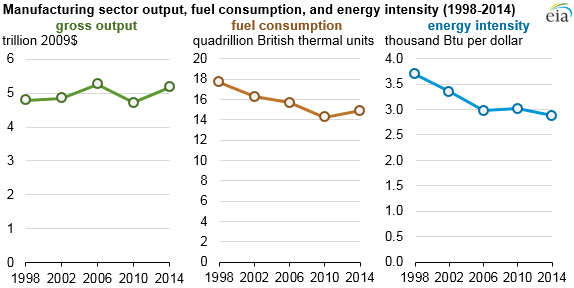 Like EIA's consumption surveys of the residential and commercial sectors, MECS is conducted on a periodic basis. The latest MECS release provides manufacturing energy consumption, energy expenditures, and other energy-related metrics based on data collected in 2015, which reflects activity in 2014. The U.S. Energy Information Administration has conducted the MECS survey eight times since the initial MECS survey in 1985. The 2014 MECS sample size of approximately 15,000 establishments was drawn from a sample frame representing 97% to 98% of the national manufacturing payroll. 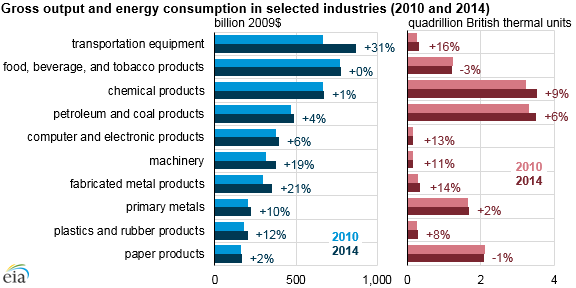 Total energy in manufacturing includes both fuel and nonfuel uses, such as when natural gas is used as a feedstock for chemical manufacturing. Considering fuel use only, natural gas made up a larger share of manufacturing use, while fuels such as coal and coke, fuel oil, and other petroleum liquids made up smaller shares. Natural gas consumption for manufacturing was 5.9 quadrillion British thermal units (Btu) in 2014, or 39% of the total fuel use in manufacturing, compared with 37% in 2010. 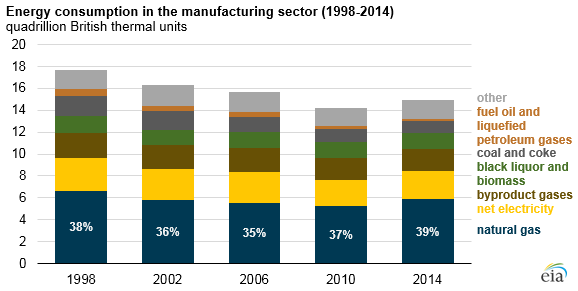 More information about the manufacturing sector's use and management of energy is available in EIA's 2014 Manufacturing Energy Consumption Survey. National and four regional estimates (Northeast, Midwest, South, and West) are provided for 21 industry subsectors, based on the North American Industrial Classification System(NAICS).