For One Week in November, the U.S. Was a Net Exporter of Crude Oil and Petroleum Products

During the week ending November 30, 2018, the United States exported more crude oil and petroleum products than it imported for the first time in weekly data going back to 1991. From November 24–30, the United States exported an estimated record 3.2 million barrels per day (b/d) of crude oil as well as an estimated 5.8 million b/d of petroleum products such as distillate fuel oil, motor gasoline, and propane.

This single-week estimate is part of a longer-term trend of declining imports of crude oil and increasing exports of petroleum products and, more recently, crude oil. From week to week, estimated net crude oil and petroleum product trade volumes can vary by as much as two million to three million barrels per day because of how the data are collected and processed.

In mid-2016, EIA improved its weekly estimates of crude oil and petroleum product exports by incorporating near real-time data from U.S. Customs and Border Protection, the government agency responsible for collecting export data for the U.S. Census Bureau. Monthly export volumes provided by the U.S. Census Bureau and published in EIA's Petroleum Supply Monthly are EIA's definitive data series for petroleum exports and are considered higher quality than the weekly estimates. 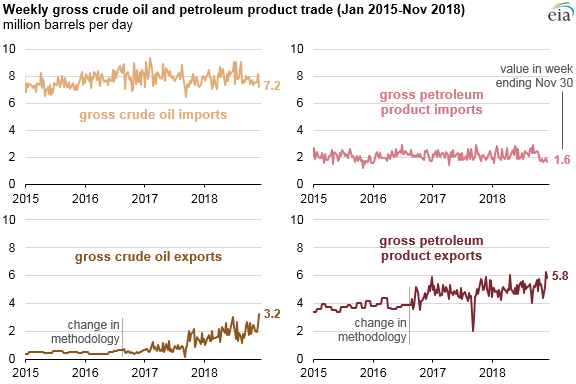