Brazil’s 2019 Bidding Round on Transfer of Rights Areas Expected to Generate an Exceptional Revenue for the Government, says GlobalData

Following discussions in Brazil's congress and government for agreeing on terms of the planned bidding round,

Adrian Lara, Senior Oil and Gas Analyst at GlobalData, a leading data and analytics company, offers his view on the impact on the upstream sector:

“The issue right now is to have the government and Petrobras agree on what is the current value of the original contract, the NOC paid about US$43bn in 2010 when the oil price was higher. Petrobras now demands an adjustment to the contract value expecting to be credited by the government. Then, for whichever value is agreed as owed to Petrobras, the government will likely use the revenue generated by the Transfer or Rights bidding round to pay the company.

“Without this agreement the bidding round has no chance of occurring soon. Also, the senate is conditioning their approval on the terms for distributing the auction revenues between federal government, state and municipalities. So it makes sense to start first with Petrobras and the government reaching an agreement, and then gain traction and incentivize the senate negotiations.

“The additional resource in the Transfer of Rights (TOR) area is reported to be 5 to 15 billion barrel of oil equivalent (boe) with low exploration risk and typical high productivities of presalt wells expected; in fact most of the blocks have fields with well-established development plans and so a bidding round on this resource should attract big players and makes sense to expect high signature bonuses. 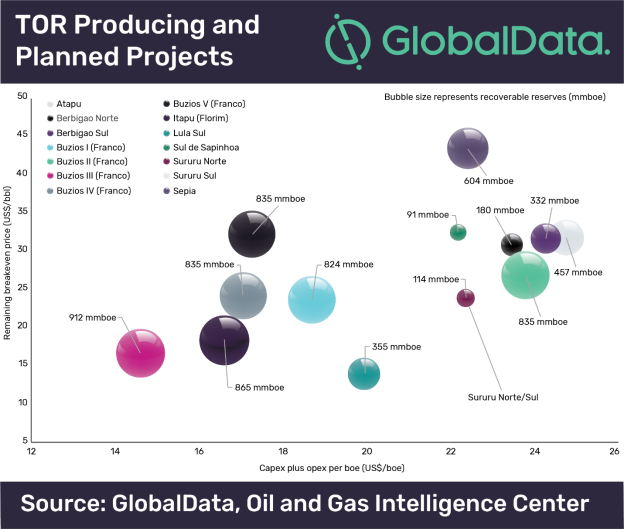 “The government's expectation is for the related auction to generate at least US$26bn in revenue which can well serve budgetary needs to counter fiscal deficits. In reality, this bidding round will be more like a farm out of assets, also very much in line with Petrobras' strategy to cope with its remaining debt of US$73bn. If states and municipalities are then formally added to the list of recipients of related revenue, there should be enough government interest for the round to occur soon.”


New service from OilVoice
Trip Shepherd is for companies who need to track their staff in areas of risk.
It's free to use, so we invite you to try it.
BrazilBidding RoundGlobalDataOffshorerevenue