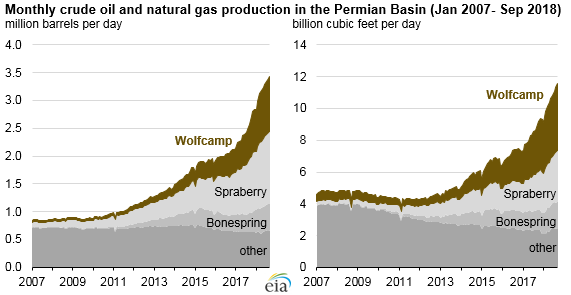 Rising productivity in the Wolfcamp, like in other plays in the Permian Basin, has been driven mostly by drilling longer horizontal laterals and optimizing completions. The length of the horizontal segments, or laterals, in the Wolfcamp increased from an average of 2,500 linear feet in 2005 to more than 8,500 linear feet in 2018. Well completion efficiency has also improved, primarily by more effectively using sand, or proppant, during the hydraulic fracturing process, as well as by using zipper fracturing—the completion of two or more wells side by side.

The Wolfcamp formation extends across the Delaware Basin, Central Basin Platform, and Midland Basin—the three sub-basins that comprise the Permian Basin. The stacked formation has four intervals, called benches, which are designated from top to bottom as A, B, C, and D. Most of the current drilling activities take place in the Delaware and Midland Basins and target the Upper Wolfcamp (benches A and B), which is more oil-rich, rather than the Lower Wolfcamp (benches C and D), which is more natural gas-rich.

Of the stacked shale formations that comprise the Permian Basin, the Wolfcamp is the deepest and thickest but varies significantly across the formation. Wolfcamp subsea depth varies in the Delaware Basin from 0 feet in the west to 9,500 feet in the central areas. In the Midland Basin, the subsea depth ranges from 2,000 feet in the east along the Eastern Shelf to 7,000 feet along the basin axis, near the western basin edge. Wolfcamp thicknessranges from about 800 feet to more than 7,000 feet thick in the Delaware Basin, and thickness ranges from 400 feet to more than 1,600 feet thick in the Midland Basin, varying from 200 feet to 400 feet in the adjacent Central Basin Platform.