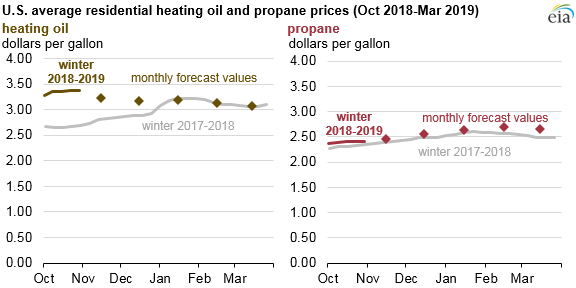 EIA's Short-Term Energy Outlook (STEO) forecasts that residential heating oil and propane prices will remain higher throughout the winter, contributing to higher expenditures. Energy bills are also influenced by weather. The National Oceanic and Atmospheric Administration (NOAA) anticipates that the 2018–2019 winter will be similar to last winter in much of the country. However, temperatures in the Midwest—the region with the most households that use propane for heating—are expected to be 3% warmer than last winter.

EIA's latest STEO forecasts that, because of factors such as higher crude oil prices and lower fuel inventories, average heating oil and propane prices will be 18% higher and 1% higher than last winter, respectively. Prices for U.S. petroleum products such as heating oil and propane tend to follow changes in the Brent crude oil spot price, the most widely used global benchmark price for crude oil. The price of Brent crude oil on September 28, 2018, was $82 per barrel (b). EIA forecasts that Brent crude oil prices will average $79/b this winter, up from $64/b last winter. 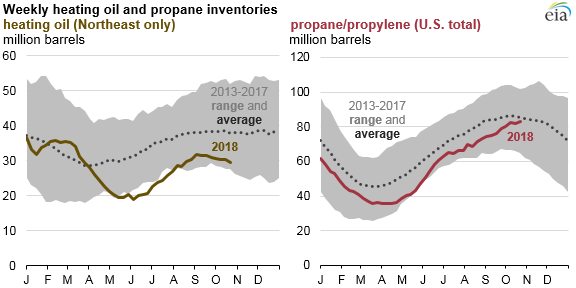 As of October 26, 2018, distillate fuel oil inventories in the Northeast (Petroleum Administration for Defense Districts 1A and 1B), where most heating oil is consumed, totaled 29.6 million barrels, 16% lower than at the same time last year and 7% lower than the five-year (2013–2017) average for that week. 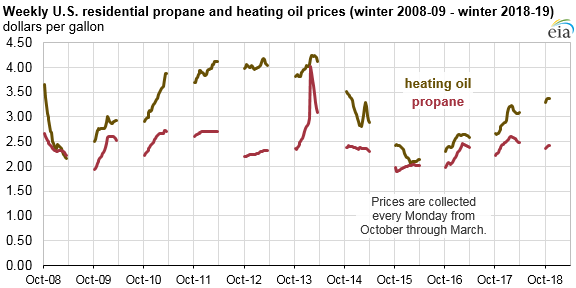 Weekly SHOPP price data are made available each Wednesday at 1:00 p.m. Eastern Time on the Winter Heating Fuels and Heating Oil and Propane Update webpages.