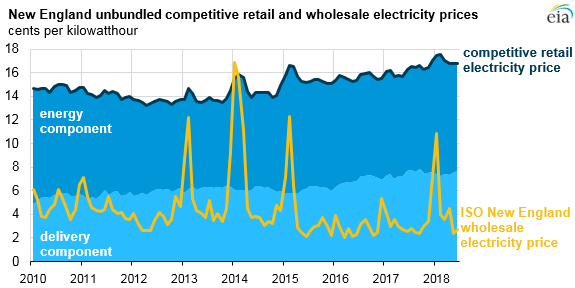 Since 2012, New England has experienced four episodes when monthly average wholesale prices increased more than 75% higher than the previous month's price. In the three months following these episodes, competitive retail prices in the region increased on average 4% compared with the three-month period before the wholesale price increase.

Wholesale electricity prices may increase for a variety of reasons, such as high electricity demand, limited fuel availability, or transmission constraints. As in other parts of the United States, natural gas is playing an increasingly important role in New England's electricity generation mix, rising from 15% in 2000 to 48% in 2017. In recent years, the region's wholesale natural gas and electricity markets have experienced severe, simultaneous price increases during periods of peak demand, partly because of the limited natural gas pipeline capacity serving the region.

Residential electricity prices in the region are higher than those paid by the commercial and industrial sectors. Before 2015, competitive retail residential prices in New England were relatively stable. However, in January of that year, the energy component of the competitive retail residential price in New England increased nearly 20% to cover price increases that had occurred during the previous two winters. During times of high volatility in wholesale electricity prices, competitive retail prices in the industrial and commercial sectors are generally quicker to respond because customers in those sectors often sign variable-pricing contracts, in which the buyer pays prices more in line with changes in the wholesale market.