In Europe, Equinor ASA, Gaz-System SA, and Snam S.p.A. are the top three spenders among all oil and gas companies on new build capital expenditure (capex) for planned and announced projects across the oil and gas value chain by 2025, according to GlobalData, a leading data and analytics company.

GlobalData's latest report, ‘Top Oil and Gas Companies Planned Projects and Capital Expenditure Outlook in Europe – Equinor Leads Capital Spending Across Oil and Gas Value Chain', reveals that Equinor ASA tops the companies European spend list with an estimated capex of US$12.4bn expected to be spent on 24 projects. Gaz-System SA and Snam S.p.A. are the second and third biggest investors with US$5.8bn (30 projects) and US$5.6bn (25 projects), respectively. With Petoro AS in fourth position with US$3.8bn (7 projects) and Lundin Petroleum in fifth with US$3.7bn (3 projects). 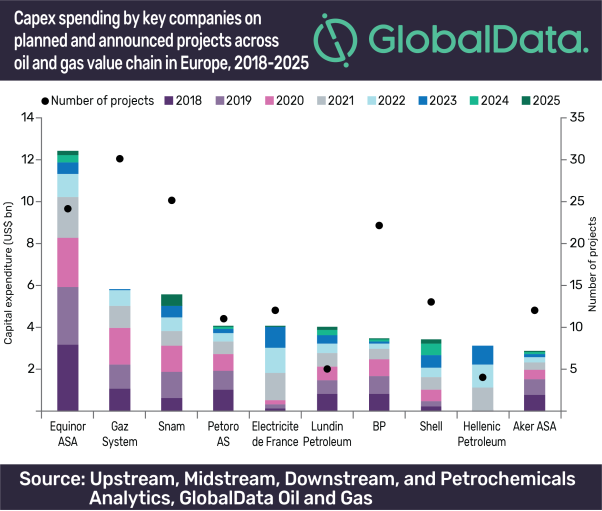 Midstream
Gaz-System SA will be the major spender in midstream sector, primarily focusing on oil and gas pipelines with a capex spend of US$5.1bn to bring 29 planned and announced projects online by 2025.

Petrochemicals
Grupa Azoty SA is expected to lead the petrochemicals sector to 2025 with a capex of US$748m during 2018–2025.

In terms of liquid storage, H.E.S. International BV is in the forefront with capex of US$0.7bn expected to be spent on an upcoming liquids storage terminal, Maasvlakte, in the Netherlands.


New service from OilVoice
Trip Shepherd is for companies who need to track their staff in areas of risk.
It's free to use, so we invite you to try it.
EquinorEquinor EnergyeuropeCAPEXGlobalDataGaz-SystemmidstreamupstreamPetrochemicals