Carbon Dioxide Emissions From the U.S. Power Sector Have Declined 28% Since 2005 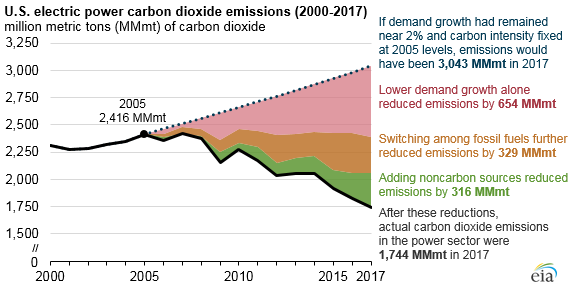 U.S. electricity demand has decreased in 6 of the past 10 years, as industrial demand has declined and residential and commercial demand has remained relatively flat. If electricity demand had continued to increase at the average rate from 1996 to 2005 (1.9% per year) instead of its actual average rate of -0.1% per year, U.S. power sector CO2 emissions in 2017 would have been about 654 MMmt more than actual 2017 levels. If the mix of fuels used to generate electricity had also stayed the same since 2005, U.S. power sector CO2 emissions would have been another 645 MMt higher in 2017.

Increases in electricity generation from noncarbon power sources since 2005 also had an effect on emissions from power generation. This growth has been driven largely by state policies and federal tax incentives that encouraged adoption of renewables. In 2005, noncarbon sources accounted for 28% of the U.S. electricity mix. By 2017, that share had grown to 38%. Almost all of this growth was in renewables, including wind and solar, as shares for other noncarbon sources such as nuclear and hydroelectricity remained relatively flat. 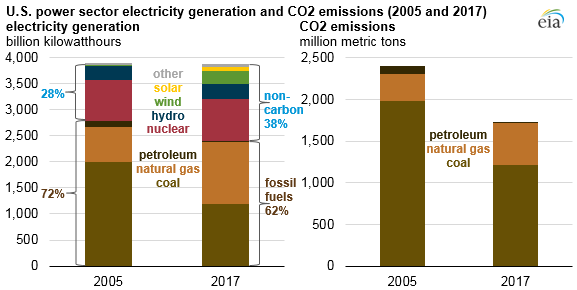