The US and Iran will lead the global polyethylene market capacity growth, which is poised to increase from 110.5 million tons per annum (mtpa) in 2017 to 150.9 mtpa in 2026, says GlobalData, a leading data and analytics company.

The company's report: ‘Global Polyethylene Industry Outlook to 2022' reveals that around 110 planned and announced plants are scheduled to come online, predominantly in the Middle East and Asia, over the next nine years.

Within the Middle East, Iran plans to add a total capacity of around 6.7 mtpa by 2026 with the help of 22 planned and announced polyethylene plants. Capital expenditure (capex) for these plants totals US$7.90bn over the next nine years. Major capacity additions will be from Sepehr Makran Iran and Sepid Mehr Iran.

The US plans to spend US$11.26bn on 19 planned and announced polyethylene plants, with a capacity of roughly 9.4 mtpa during the outlook period. Major capacity additions will be from Badlands Ngls LLC.

Dayanand Kharade, Petrochemicals Project Manager at GlobalData, says: “For Iran and the US, the low cost abundant supply of natural gas is the primary reason for the rush in polyethylene capacity additions. Iran, on account of cheaper feedstock and proximity to booming Asian markets is set to add large capacity in the upcoming period.

“The capacity additions in the US are primarily targeting the exports to other American countries.” 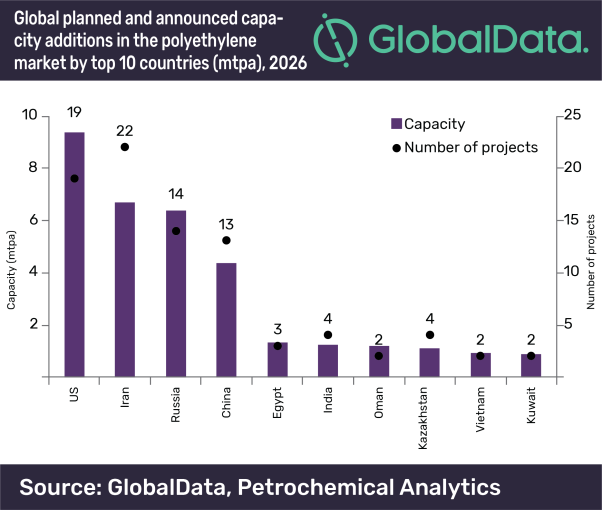 In Asia, China has 13 planned and announced polyethylene plants, with a total capacity of approximately 4.4 mtpa by 2026. Capex for these plants is US$4.28bn. Major capacity additions will be from CNOOC Ltd and Zhejiang Petrochemical Co Ltd.

Kharade adds: “China, with its huge population and growing economy is expected to continue to rise in polyethylene demand. To meet this demand, the country is set to add a number of petrochemical projects.”

In the Former Soviet Union (FSU), most polyethylene capacity additions are in Russia, with capacity of roughly 6.4 mtpa by 2026. Capex for these plants totals US$9.37bn during the forecast period. Sibur Holding is the top company accounting for the major capacity additions in Russia.

Bolivia leads in South America with planned and announced capacity additions of around 0.8 mtpa by 2026. Capex for these plants totals US$1.18bn. In Africa, Egypt plans to spend US$1.27bn to add a capacity of around 1.4 mtpa, which is expected to come on-stream by 2026.

Sibur Holding, Badlands Ngls LLC, and Gazprom are the top three companies globally in terms of planned capacity additions over the outlook period.


New service from OilVoice
Trip Shepherd is for companies who need to track their staff in areas of risk.
It's free to use, so we invite you to try it.
GlobalDataUSAUnited StatesPolyethyleneIranIslamic Republic of Iran