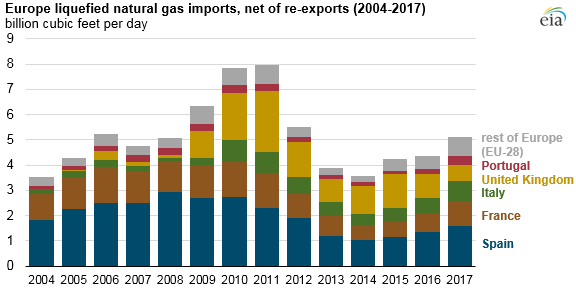 Imports of liquefied natural gas (LNG) to the 28 countries that make up the European Union (EU-28) averaged 5.1 billion cubic feet per day (Bcf/d) in 2017, increasing for the third consecutive year but remaining below their 2011 peak. In 2017, imports of LNG into EU-28 accounted for 13% of the global total. LNG import capacity in EU-28 currently stands at 20 Bcf/d, or almost one-fifth of the global total, but utilization of EU-28 LNG import facilities has declined from about 50% in 2010 to between 20% and 25% in recent years as expansions in regasification capacity far exceeded demand for LNG imports. 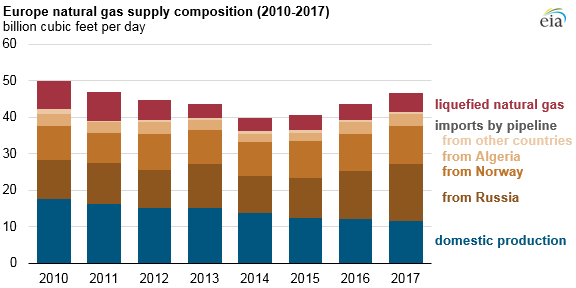 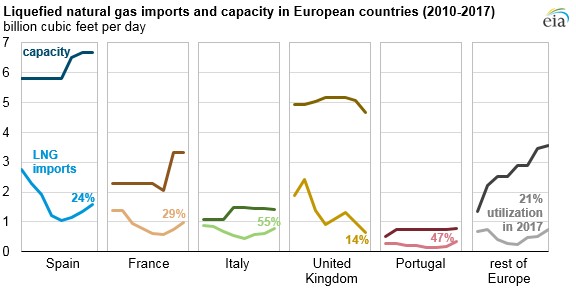 Going forward, LNG imports in Europe will have to compete on a cost basis with existing and new pipeline supplies of natural gas, particularly from Russia. A new undersea pipeline from Russia to Germany—Nord Stream 2, with a capacity of 5.3 Bcf/d—has secured permits needed for construction in Russia, Germany, Finland, and Sweden. Construction of the Russian portion of the pipeline has started, but developers have not been able to obtain permits in Poland and Denmark and have been considering alternative routes. This pipeline's expected in-service date is the end of 2019.