Technical analyst Clive Maund charts a small-cap oil and gas company with a play in Oklahoma's SCOOP region that he sees as a strong buy.

With a market crash drawing closer the only sector we will generally be buying at this time is the precious metals sector, which is about the only sector that has not participated in the "everything bubble," and is extremely unpopular and beaten down, and has demonstrated that it will behave in a counter-cyclical manner, i.e., go up when the market tanks. The oil sector is expected to go down with the market, for the obvious reason that a recession/depression reduces the demand for oil.

However, as ever, there are exceptions, and BNK Petroleum Inc. (BKX:TSX;BNKPF:OTCQX) is one of them, for the fundamental reason that Exxon is taking an interest in it, and technically it is very cheap and showing signs that it will soon take off higher. An important tactical consideration is that due to the proximity of a strong and clearly defined support level, we can set a close stop to get us out for a minor loss in the event of it being whacked by a sudden plunge in the broad market.

On the 6-month chart for BNK we can see that, following a quite heavy reaction from May through late July, the stock has tracked sideways in a narrow range, marking out what now looks like a Triple Bottom base pattern, which fits within a much larger base that we will soon look at on the 10-year chart. An interesting point to observe is how this presumed base pattern has formed at the low of a sharp high volume intraday spike lower back in June. The duration of this range has allowed time for the 50-day moving average to drop down close to the price and for downside momentum to drop out, as shown by the MACD indicator gradually working its way back up to the 0 line, which are usually necessary preconditions for a rally.

The volume pattern is bullish and of particular interest is the larger white candles that have formed over the past several days at the support, accompanied by a big build-up in upside volume that has driven the Accumulation line sharply higher so that it is at new highs – this is viewed as a quite strongly bullish development that is likely to lead to an advance and upside breakout. Thus, with the price still close to the lower boundary of the range, we are believed to be at a good point to buy here, especially as we can strictly limit downside risk and protect against the impact of a market crash by placing a stop just beneath the recent intraday lows, say at C$0.378. 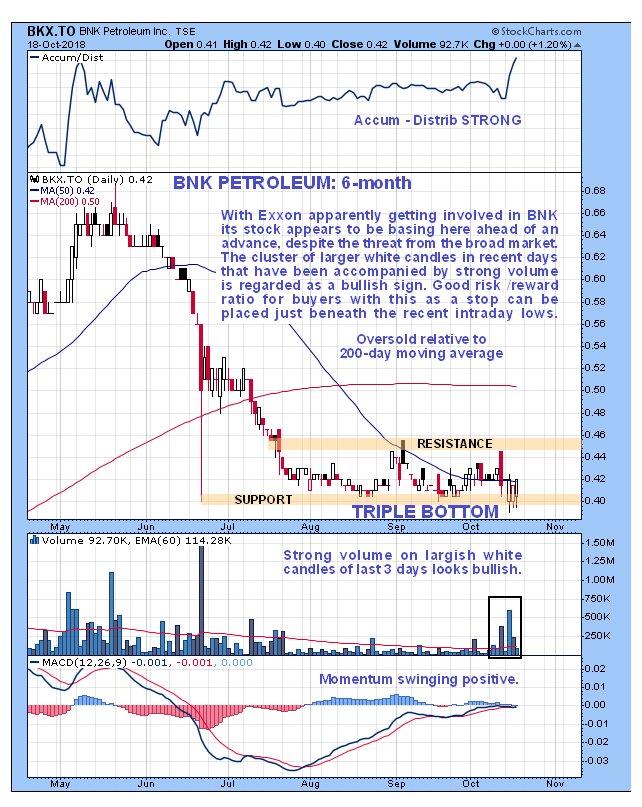 The long-term chart is illuminating and reveals two important points. One is that BNK is historically very cheap: it got as high as about C$6.80 in 2011. The other is that a giant low Pan base has been forming in the stock since late 2014, or for nearly four years now, and with the rally from mid-2017 through May of this year on good volume, it is showing sings that it is getting ready to break out of it. 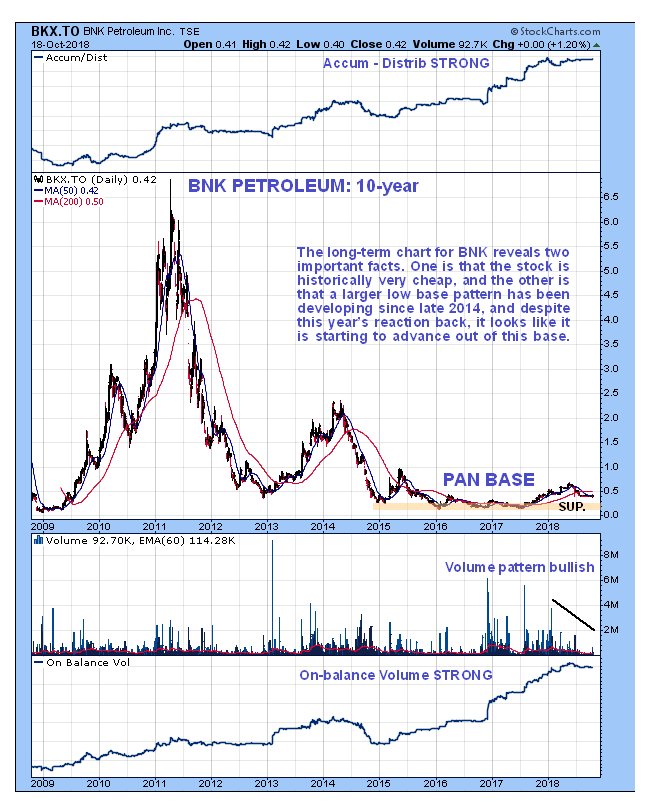 The conclusion is that BNK Petroleum is a strong buy here, and it is a relatively low risk play because the proximity of an important support level means that a relatively close stop may be set to limit loss in the event that the trade doesn't work out. Despite there being 232.7 million shares in issue, the stock trades in hopelessly light volumes on the US OTC market, where it should be avoided, for this reason.