Asia is forecast to be the major contributor to the growth of the global refinery fluid catalytic cracking units (FCCU) industry between 2018 and 2022, accounting for around 54% of the global planned and announced refinery FCCU capacity additions by 2022, according to GlobalData, a leading data and analytics company.

The company's report: ‘Global Refinery Fluid Catalytic Cracking Units (FCCU) Outlook to 2022' forecasts that around 3,271 thousand barrels of oil per day (mbd) of planned refinery FCCU capacity will be added globally by 2022, taking the total global refinery fluid cracking unit capacity to around 24,152 mbd by 2022.

Asia also has the highest new build capital expenditure (capex) spending globally with roughly US$30.8bn during the 2018–2022 period. Among the countries in the region, China will have the highest planned refinery FCCU additions of 973 mbd by 2022. 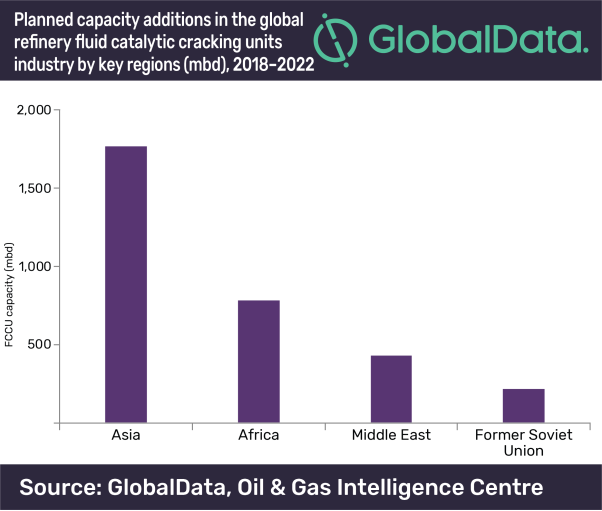 In terms of capacity, Dayushan Island refinery in China, Lagos I refinery in Nigeria and Pulau Muara Besar refinery in Brunei are the top three planned and announced refinery FCCUs for the 2018–2022 period with capacities of 304 mbd, 247 mbd, and 172 mbd respectively.

In terms of capex, Nakhodka refinery in Russia, Tabi refinery in Angola, and Yanbu IV refinery in Saudi Arabia are the top three planned and announced refinery FCCUs globally between 2018 and 2022, with capex of US$2.5bn, US$2.16bn, and US$1.9bn respectively.


New service from OilVoice
Trip Shepherd is for companies who need to track their staff in areas of risk.
It's free to use, so we invite you to try it.
AsiaRefineryFCCUGlobalData