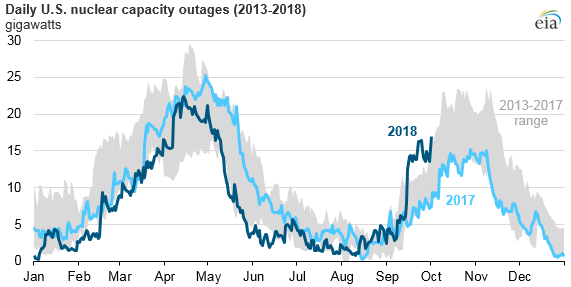 Electric generation capacity losses as a result of U.S. nuclear plant outages were relatively low during much of the 2018 summer, averaging 2.8 gigawatts (GW) from June through August. This year's seasonal maintenance and refueling cycle began earlier than in recent years, and total nuclear outages averaged 14.5 GW in the last week of September. The earlier-than-expected retirement of the Oyster Creek Generating Station and a temporary plant shutdown related to Hurricane Florence also increased outages in September.

Nuclear capacity outages are typically lowest during the summer and winter months when electricity consumption is high to meet increased cooling and heating demand. Nuclear power plant outages can be either scheduled or unscheduled, and they can range from a partial outage, where only some of a plant's capacity is offline, to a full outage, where the entire plant is shut down.

A scheduled shutdown of a nuclear power plant is generally timed to coincide with the plant's refueling cycle. Nuclear power plants typically refuel every 18 to 24 months, often during the fall and spring when electricity demand is lower. During a refueling outage, plants typically optimize downtime by scheduling facility upgrades, repairs, and other maintenance work to be completed while the reactor is offline.

During the past six years, average refueling outages have become shorter, decreasing from an average of 46 days in 2012 to 34 days in 2018. The decrease in refueling outage times is a result of greater operator experience in regulated markets and competition from other generators in unregulated or wholesale electricity markets. 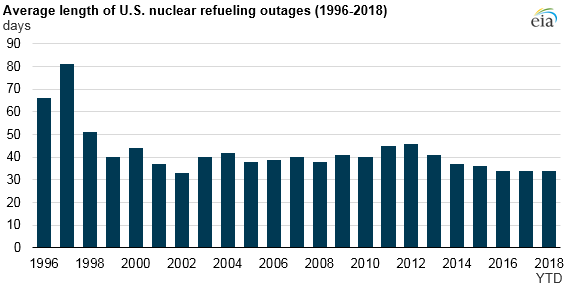 An unscheduled, or forced, shut down of a nuclear power reactor can result from equipment failure, operational error, or environmental conditions. Most unplanned outages occur because of non-reactor core issues—including external plant conditions, such as severe weather, or non-nuclear internal plant conditions, such as those involving steam turbine and electricity generation sub-systems.

Hurricane Florence caused a nine-day unscheduled outage at the Brunswick Nuclear Plant near Wilmington, North Carolina, in mid-September. The 1,870 megawatt (MW) facility is located about four miles from the Atlantic coast and was safely shut down by plant operators before hurricane force winds and flood waters reached the site.

Also in mid-September, the 625 MW Oyster Creek Nuclear Generating Plant in Forked River, New Jersey, permanently shut down. The plant was previously expected to retire on December 31, 2019, but the timeline was accelerated by more than a year to coincide with the end of the plant's final fuel and maintenance cycle. The retirement of the plant is considered an unscheduled shutdown in EIA data until the Nuclear Regulatory Commission amends its outage data to reflect the closure.

Total unscheduled outages as a result of these plant shutdowns decreased from 85 in 2015, to 78 in 2016 to 55 in 2017, and to 37 so far in 2018. These outages can fluctuate year to year based on plant technical issues and external circumstances. 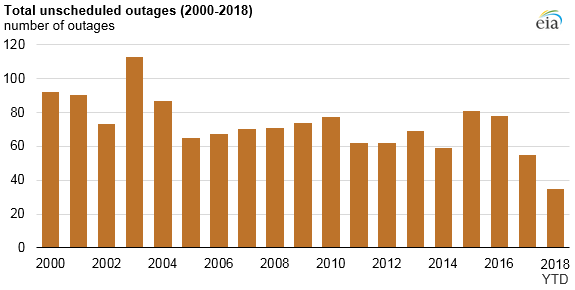 Outages are expected to continue increasing this year as nuclear plants enter the fall refueling and maintenance season. More information on the daily operation of U.S. nuclear power plants is available on EIA's Status of Nuclear Outages webpage, which is based on data collected by the U.S. Nuclear Regulatory Commission.