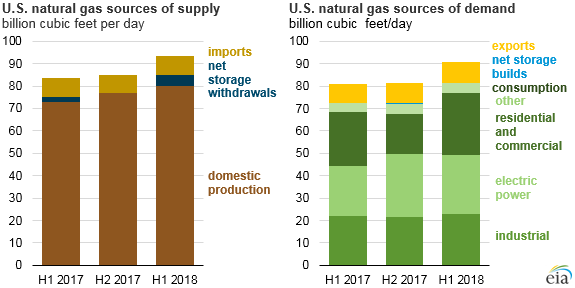 The increase in U.S. natural gas supply was driven by production, especially from the Appalachia region. Total U.S. dry natural gas production rose 7.4 Bcf/d (10%) compared to the same period last year. The additional pipeline capacity brought into service since June 2017 has enabled production increases, including the Leach XPress, the Rover Pipeline, and Phase 1 of Atlantic Sunrise, all of which transport natural gas out of the Northeast region.

In the U.S. electric power sector, power plants used 3.6 Bcf/d (16%) more natural gas during the first half of 2018 compared with the same time last year. Electricity demand tends to increase as hot weather increases demand for air conditioning or as cold weather increases demand for electric space heating. Natural gas consumption in the power sector has also increased with the increased buildout of natural gas-fired power plants in much of the country.

Gross U.S. exports of natural gas have also increased from year-ago levels. Liquefied natural gas (LNG) exports, which mostly go to countries in Asia, and pipeline exports, which go to Mexico and Canada, collectively increased by an average of 0.7 Bcf/d (8%) from the first half of 2017 to the first half of 2018. LNG exports increased after Train 4 at the Sabine Pass LNG export facility was completed in October 2017 and Cove Point LNG export terminal began operations in March 2018.

Overall, consumption and exports increased 2.7 Bcf/d more than production and imports in the first half of the year, which prompted withdrawals of natural gas from storage facilities. Relatively high net withdrawals and low net injections so far in 2018 have resulted in natural gas inventories falling 18% lower than the previous five-year average as of September 21, 2018.