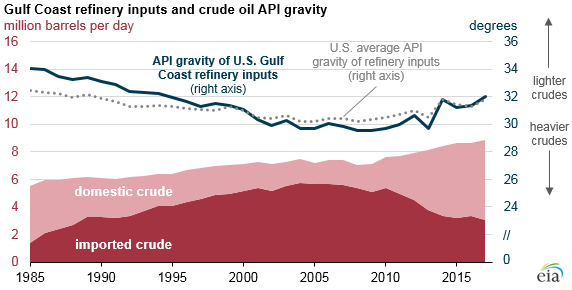 API gravity is a measure of crude oil density that refiners consider when making decisions about the types of crude oil to process. Crude oil with a higher API gravity is lighter, or less dense. Small changes in the API gravity of the combination of crude oils that a refiner processes, called the crude slate, can affect the profitability of the refinery and the shares of petroleum products produced. 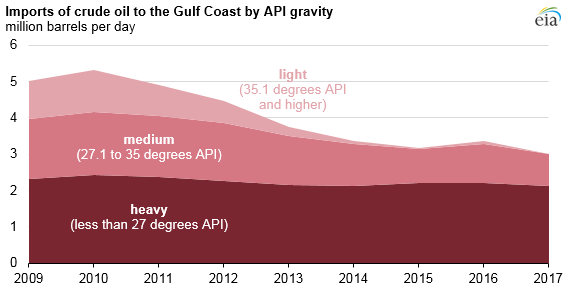 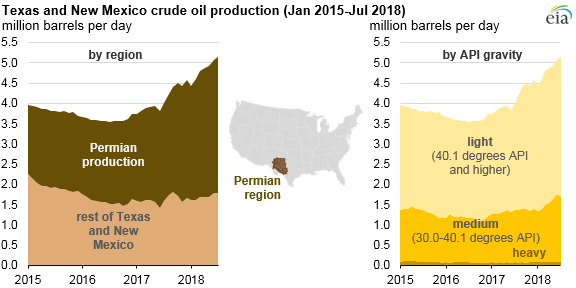 The Permian Basin is located in the Texas Inland and New Mexico refining districts, where crude oil inputs account for a comparatively small portion (9%) of total Gulf Coast refining. The capabilities of refineries in these two districts, and their proximity to light production from the Permian Basin, result in them having a lighter crude slate than the other refining districts in the Gulf Coast region, which have relatively easier access to imports of heavy crude oil.

The recent Permian production increase could lead the Texas Inland and New Mexico refining districts to process more light oil from the Permian, further lightening the crude slates in those regions. However, refineries in those regions could face other limitations, as lighter crude oil input slates can lead to operational inefficiencies in refineries.