Like Natural Gas, Coal in the Southwest Power Pool is Cycled to Accommodate Wind Power

Electricity generation in the Southwest Power Pool (SPP), a regional transmission organization (RTO) covering all or part of fourteen Midwestern states, is mostly provided by three fuels: coal, natural gas, and wind. Several states in SPP have the highest shares of wind generation in the country. In SPP, unlike in other regions, some coal-fired generators are operated similar to natural gas units and are used to balance fluctuations in wind output throughout the day.

In SPP, generating units in a power plant are scheduled by one of two commitment types: market-committed or self-committed.

Self-committed generators choose to operate and generate electricity regardless of whether or not the market-clearing price is sufficient to cover the generating unit's marginal costs. Although this decision could lead to a loss in revenue, a plant may choose to self-commit if the cost of restarting the generating unit could exceed the cost of continued operation while taking the lower market-clearing price.

Some power plant technologies operating in SPP tend to favor one type of commitment. For example, wind turbines, nuclear power plants, and most hydroelectric generators are usually self-committed. Natural gas-fired generators tend to be market-committed. Coal-fired generators, which represent the largest share of electric generating capacity in SPP, often have several units in both self-committed and market-committed schedules. 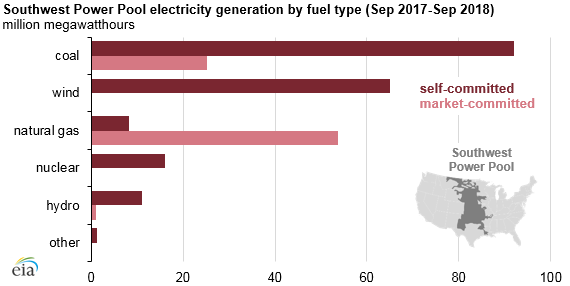 Self-committed coal resources in SPP may operate at varying generation levels throughout the day, a pattern referred to as cycling. This cycling behavior appears to be in response to changes in generation levels from wind generators, which vary throughout the day based on the current wind speed. Generator output also varies across seasons, reflecting changes in overall electricity demand and wind resources. 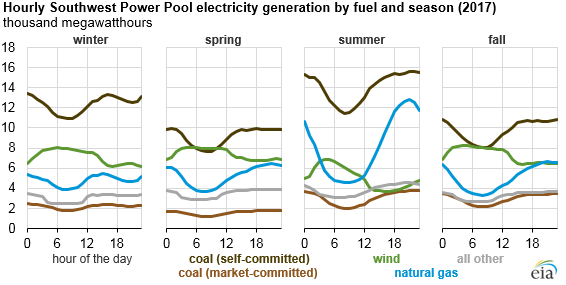