OPEC Net Oil Export Revenues Increased in 2017, Will Likely Continue to Increase in 2018 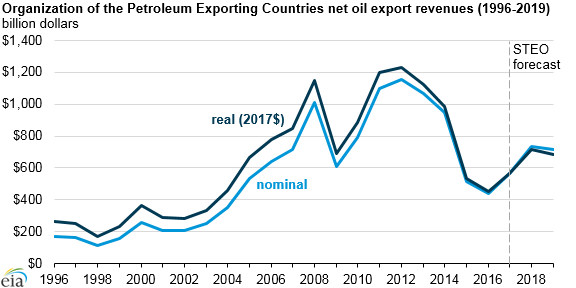 Members of the Organization of the Petroleum Exporting Countries (OPEC) received about $567 billion in net oil export revenues in 2017, up 29% from revenues in 2016. Increases in both crude oil prices and in net OPEC oil exports drove revenues higher in 2017, and EIA expects that revenues will continue to increase in 2018, based on EIA's August Short-Term Energy Outlook.

EIA projects that OPEC net oil export revenues will increase to $736 billion in 2018, up 30% from 2017. This expected increase follows higher forecast annual crude oil prices in 2018 and more than offsets slightly lower crude oil production from OPEC members in 2018. OPEC revenues will decline to $719 billion in 2019, according to EIA projections, driven mainly by lower crude oil prices, as well as slightly lower OPEC production and exports.

Saudi Arabia receives more oil export revenue than any other member of OPEC. Saudi Arabia's share of total OPEC net oil export revenues was nearly 30% in 2017, and it has remained relatively consistent since at least 1996, ranging between 28% and 34%. Iran's share of OPEC revenues increased to 10% in 2017 to its highest level since 1999, recovering from declines from 2012 through 2015 that resulted from sanctions targeting Iran's oil exports.

Iraq's share of total OPEC revenues also increased, reaching more than 12% in 2017, as the country's crude oil production and exports continued to rise. Iraq's exports averaged about 3.8 million barrels per day in 2017, despite the shut-in of northern Iraqi production and exports following the Kurdish Region's independence referendum in September 2017 and the ensuing takeover of Kirkuk area fields by Iraqi forces. Iraq's crude oil production from the southern fields largely offset the northern Iraqi output losses in 2017.

Libya's share of total OPEC oil export revenues has fluctuated since 2010 as the country's oil sector was disrupted during the civil war that overthrew the Gadhafi regime. Since 2010, warring factions in the country have repeatedly targeted oil sector installations, particularly Libya's oil export facilities. Venezuela's share of OPEC revenues also declined in 2017, as the country experienced significant declines in production amid severe economic instability.