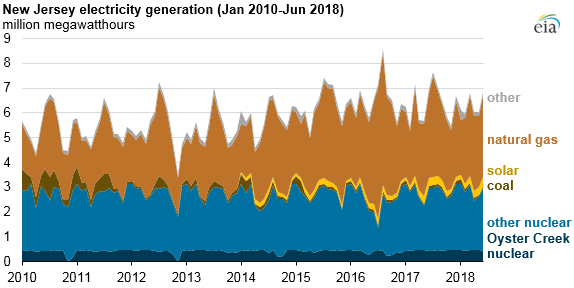 The Oyster Creek Nuclear Generating Station, located 50 miles east of Philadelphia in Forked River, New Jersey, is scheduled to retire on Monday, September 17. The plant first came online on December 1, 1969, making it the oldest commercially operated nuclear power plant in the United States. Oyster Creek was previously expected to retire on December 31, 2019, but its retirement was accelerated by more than a year to coincide with the plant's fuel and maintenance cycle.

Oyster Creek is a 625 megawatt (MW) single-unit General Electric boiling water reactor. In 2017, Oyster Creek generated 5.4 million megawatthours of electricity, or almost twice as much as all of the solar photovoltaic systems in New Jersey.

When Oyster Creek's initial 40-year license expired in 2009, the Nuclear Regulatory Commission (NRC) granted the plant a 20-year license renewal. However, in 2010 an agreement was reached between Oyster Creek's owner-operator Exelon and New Jersey state environmental regulators to retire the plant in 2019. Among the factors affecting this decision were local water safety concerns and estimated costs of more than $800 million to install cooling towers to meet new environmental standards. 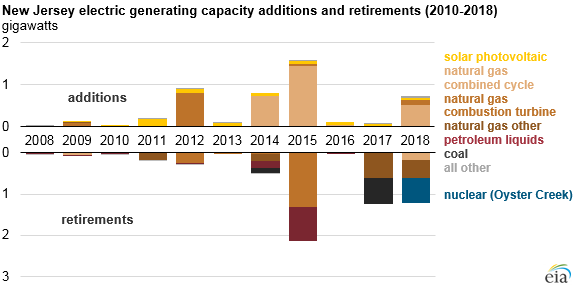 Oyster Creek is one of four nuclear power reactors in New Jersey. The others are Salem Generating Station Units 1 and 2 and Hope Creek Nuclear Generating Station Unit 1. Nuclear power accounted for 45% of the state's total electricity production in 2017. Oyster Creek alone represents 15% of the state's total installed nuclear capacity and about 7% of total electricity production.

Oyster Creek will be the sixth nuclear power plant to retire in the past five years. After Oyster Creek's retirement, the United States will have 98 operating nuclear reactors at 59 plants. Twelve of these reactors, with a combined capacity of 11.7 gigawatts, are scheduled to retire within the next seven years.

Oyster Creek is one of four nuclear power plants—along with Palisades Power Plant, Pilgrim Nuclear Power Station, and Three Mile Island Nuclear Generating Station—that have planned retirement dates more than a decade before their operating licenses expire. Economic factors have played a significant role in decisions to continue operating or to retire nuclear power plants, as increased competition from natural gas and renewables has made it increasingly difficult for nuclear generators to compete in electricity markets.

When a nuclear plant retires, it stops producing electricity and enters into the decommissioning phase. Decommissioning involves removing and safely storing spent nuclear fuel, decontaminating the plant to reduce residual radioactivity, dismantling plant structures, removing contaminated materials to disposal facilities, and then releasing the property for other uses once the NRC has determined the site is safe.