Coal is the Most-Used Electricity Generation Source in 18 States; Natural Gas in 16 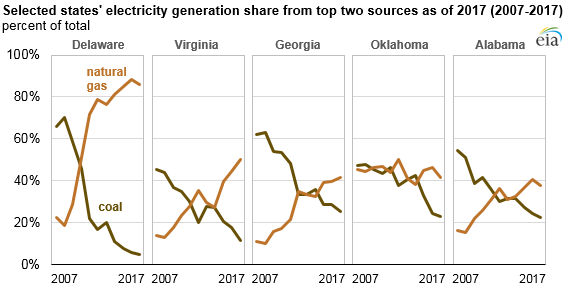 In the 10 states that were primarily generating electricity from coal in 2007 but not 2017, 5 of those states are now primarily generating electricity from natural gas and 5 primarily from nuclear. These changes have occurred as coal-fired power plants have retired or been used less and as natural gas-fired power plants have been built and used more nationwide. Only one nuclear power plant was built in those years—Watts Bar Unit 2 in Tennessee—but some other nuclear power plants across the country have completed uprates to their existing nuclear generators. 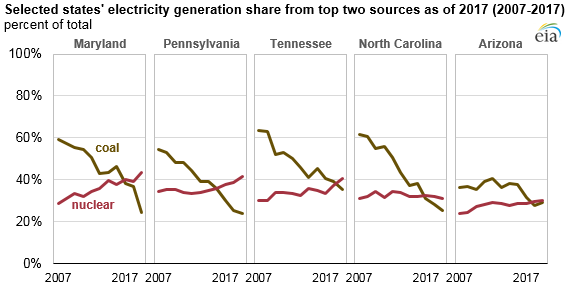 In New Jersey, the addition of natural gas-fired generators led natural gas to surpass nuclear in 2015. More than a quarter of New Jersey's currently operating natural-gas fired capacity came online from 2009 through 2016.

More information on electricity generation by state—both annual data through 2017 and monthly data through June 2018—is available in EIA's Electric Power Monthly.