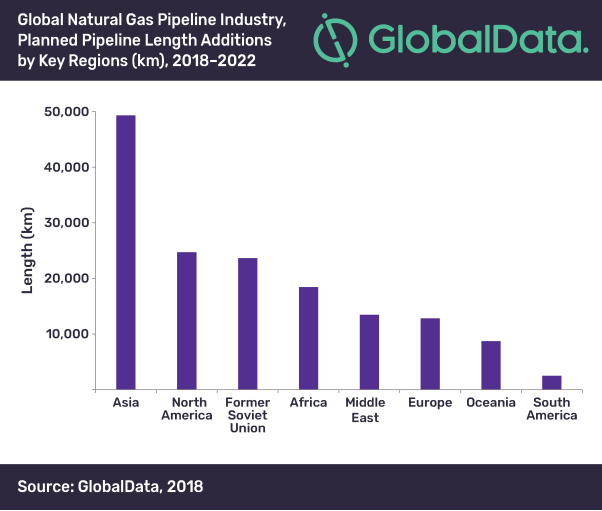 Soorya Tejomoortula, Oil & Gas Analyst at GlobalData, explains: “The growing demand of natural gas is driving the growth of natural gas pipeline network in India. Burgeoning population, rapid industrialization and urbanization, growing domestic consumption and Indian government's plans to electrify the rural areas are some of the drivers for natural gas demand in the country.”

Tejomoortula adds: “The US is expanding its natural gas pipelines, mainly to move growing natural gas production from shale gas basins and to connect planned liquefaction terminals for exports.”

The Former Soviet Union will be the third highest among the global regions, in terms of natural gas pipeline length additions as well as the highest new build capex spending globally with around US$96.3bn during the outlook period. The region is expected to add around 23,621 km of planned natural gas pipelines by 2022. Among the countries in the Former Soviet Union, Russia would lead with planned length additions of 18,219 km.

In terms of capex, Xinjiang–Guangdong–Zhejiang SNG pipeline in China, Russia–India pipeline and Shtokman pipeline in Russia are the top three planned and announced natural gas pipelines globally, for the outlook period


New service from OilVoice
Trip Shepherd is for companies who need to track their staff in areas of risk.
It's free to use, so we invite you to try it.
natural gaspipelineAsiaGlobalDataNorth America