Russia is set to reap record ruble revenues from the upstream oil and gas sector over the next six years, according to GlobalData, a leading data and analytics company.

As the country's oil export duties are phased out over the 2019-2024 period by the so-called tax maneuver, Mineral Extraction Tax (MET) rates will increase to compensate. The tax maneuver will boost already-rising MET revenues, with the government having collected RUB2.7 trillion in MET in the first six months of 2018, compared to RUB1.9 trillion in the first half of 2017.

Will Scargill, Senior Analyst at GlobalData, commented, “With prices having remained over US$70/bbl in recent months, the combination of this tax change, production growth and a weakened ruble mean that government revenues from the oil and gas sector are forecast to exceed their 2014 peak in ruble terms.'' 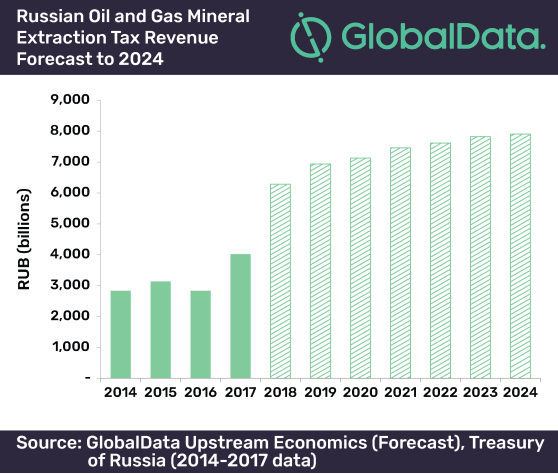 IMAGE FOR PUBLICATION: Please click this link for the chart: ‘Russian Oil and Gas Mineral Extraction Tax Revenue Forecast to 2024'

Rising oil prices had a significant effect as MET rates are directly tied to the Urals crude price. June revenues saw the effects of production increases as the OPEC+ alliance loosened output caps.

Scargill continued, ‘‘The tax maneuver is designed to be neutral for producers' net revenue. Domestic oil prices are expected to converge to international prices due to the removal of export duties and the government will capture these additional revenues by applying higher MET rates to all production, not just exports.''

Oil production contributed 87% of MET receipts in the first half of 2018 which is set to continue as the tax maneuver increases oil MET rates. Although the Russian government has focused significant effort on promoting offshore developments, just 2.4% of MET receipts are expected to come from offshore fields by 2024, partly due to the significant tax breaks offered to offshore developments as a result of the government wanting to stimulate investment.

In an effort to promote refinery modernization and mitigate domestic fuel price increases, the tax maneuver will be accompanied by the introduction of a negative excise tax, rewarding qualifying refiners. However, the government still expects the overall effect of the measures to be positive for budget revenue.

Scargill adds, ‘‘The oil and gas sector provides the foundation of the Russian budget, contributing 40% of federal revenue in 2017. Price volatility remains a risk as tax rates are directly linked to the Urals price, but at current price levels the revenue forecast appears strong.''


New service from OilVoice
Trip Shepherd is for companies who need to track their staff in areas of risk.
It's free to use, so we invite you to try it.
GlobalDataRussiaBudgetOilgasrevenueUpstexports