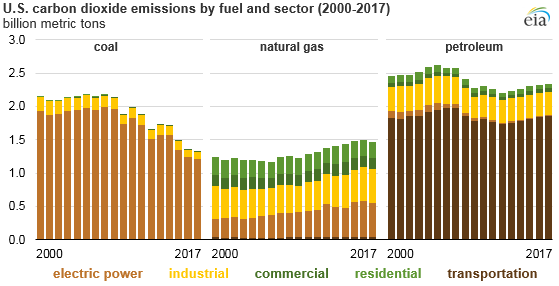 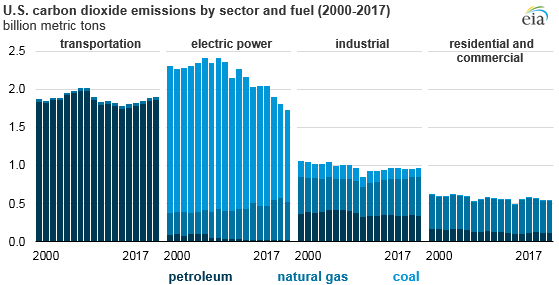 The electric power sector was the only U.S. sector in which energy-related emissions decreased in 2017, and the 4.6% decline was enough to offset increases in all other sectors. In recent years, the generation mix has shifted away from coal and toward natural gas and renewables. The shift toward natural gas from coal lowers CO2 emissions because natural gas produces fewer emissions per unit of energy consumed than coal and because natural gas generators typically use less energy than coal plants to generate each kilowatthour of electricity. Electricity generation from renewable energy technologies has increased; these technologies do not directly emit CO2 as part of their electricity generation. In EIA's emissions data series, emissions from biomass combustion are excluded from reported energy-related emissions according to international convention.

In addition to reduced CO2 emissions as a result of utilization of less carbon-intensive generation sources, CO2 emissions were also lower in 2017 because of lower electricity sales, which in 2017 experienced the largest drop since the economic recession in 2009. The decline in CO2 emissions in the residential and commercial sectors was largely attributable to milder weather. Cooler summers reduce electricity consumption for cooling, and warmer winters reduce electricity consumption for heating (and also reduce heating-related consumption of natural gas and petroleum). Electricity sales to the industrial sector were also lower in 2017, despite an overall increase in manufacturing output.