North America is forecast to add the highest trunk pipeline length to the global crude oil pipelines industry of any region between 2018 and 2022, contributing a total length of 16,136 km, which is 44% of global planned additions, according to leading data and analytics company GlobalData.

The company's report: ‘Global Crude Oil Pipelines Industry Outlook to 2022' forecasts that around 36,876 kilometers (km) of planed pipeline length will be added globally by 2022, taking the total global crude oil pipeline length to 398,769 km by 2022.

North America also has the highest new build capex spending of all the regions, with approximately US$48.8bn during 2018–2022 period. Among the countries in the region, the US would have the highest planned pipeline additions of 11,168 km by 2022. 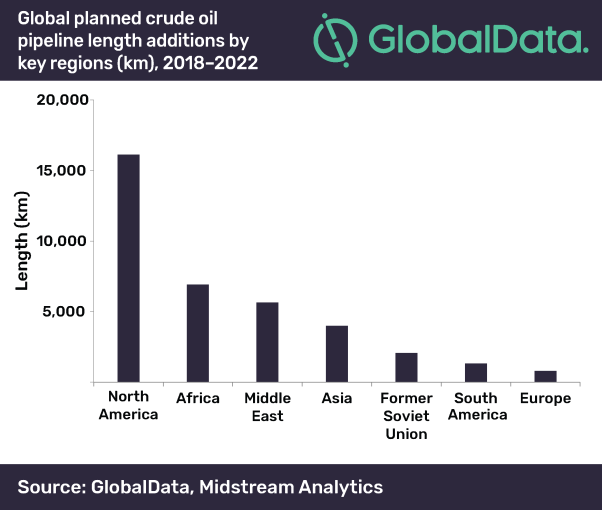 Tejomoortula adds: “Africa is expanding its crude oil pipeline network for domestic consumption as well as for exports. The planned investment for the pipeline projects are will also generate employment and improve the socio-economic conditions in the region.”

The Middle East is the third highest among the global regions in terms of pipeline length additions and the second highest in the industry for spending on new build oil pipelines. The region is expected to add about 5,655 km of planned oil pipelines with estimated capex of $21.6bn spent between 2018 and 2022. Among the countries in the Middle East, Iran will lead with a planned length additions of 1,198 km by 2022, according to GlobalData's forecast.

The report also states that the three longest planned global crude oil pipelines in the forecast period are Keystone XL Project in Canada, Basra–Aqaba Oil pipeline in Iraq, and South Sudan–Djibouti in South Sudan with lengths of 1,897 km, 1,700 km and 1,600 km respectively. All the three are planned natural gas pipelines.


New service from OilVoice
Trip Shepherd is for companies who need to track their staff in areas of risk.
It's free to use, so we invite you to try it.
CrudeCrude oilOilGlobalDataNorth AmericapipelineUnited States