Led by Asia and the Middle East, the global petrochemicals market capacity is poised to grow from 1,547.2 million tons per annum (mtpa) in 2017 to 1,931.5 mtpa in 2026, says leading data and analytics company GlobalData.

The company's latest report, ‘Semi-Annual Global Petrochemicals Capacity and Capital Expenditure Outlook' reveals that around 982 planned and announced plants are slated to come online, primarily in Asia and the Middle East, over the nine year period.

Asia, the Middle East, and North America will be the top regions contributing to capacity additions during the outlook period. Within Asia, with 244 out of the total 482 planned and announced petrochemical plants and a total capacity of 98.2 mtpa by 2026, China is the top country. Capital expenditure (capex) for these plants in China is estimated to total $51.6bn. China Petrochemical, Zhejiang Petrochemical and Wanhua Chemical are the top three companies accounting for the major capacity additions in China.

Dayanand Kharade, Petrochemicals Research Manager at GlobalData said, “In Asia, China, due to its increasing petrochemicals demand, is contributing to large capacity additions. The country will add more than half the number of upcoming projects in Asia. In the Middle East, Iran with its feedstock advantage is set to have large capacity additions, primarily targeting exports to Asia and Europe.” 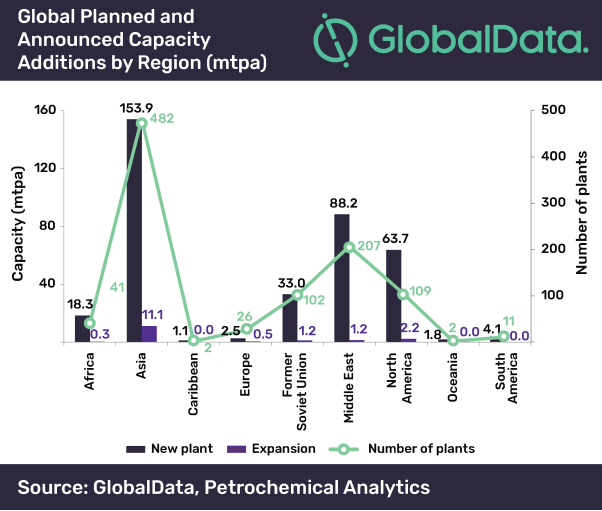 The US has 98 planned and announced petrochemical plants, with a total capacity addition of roughly 63 mtpa by 2026. The capex for these plants is $52bn. Major capacity additions will be from IGP Methanol and NW Innovation Works.

In South America, Venezuela plans to spend $1.5bn in the coming years to add a capacity of 2.1 mtpa.

In Europe, Poland plans to spend $0.8bn to add capacity of roughly 0.9 mtpa, which is expected to come on-stream by 2026.


New service from OilVoice
Trip Shepherd is for companies who need to track their staff in areas of risk.
It's free to use, so we invite you to try it.
AsiaPetrochemicalsProductionGlobalDataMiddle East