Source: U.S. Energy Information Administration and U.S. Census Bureau
Note: Not included in the map are the Houston Intercontinental Airport and the Sugar Land Regional Airport, which are also ports within the Houston-Galveston port district.

Total U.S. crude oil exports rose to a record high of 2 million b/d in May. On average since mid-2017, the U.S. port district of Houston-Galveston has accounted for slightly more than half of the crude oil exported from the United States, and the share increased to a record 70% in May. A port district is a geographic region defined by U.S. Customs and encompasses several individual U.S. ports of entry. The Houston-Galveston port district includes the port of Houston as well as several other ports along the Texas Gulf Coast, from Galveston to Corpus Christi. 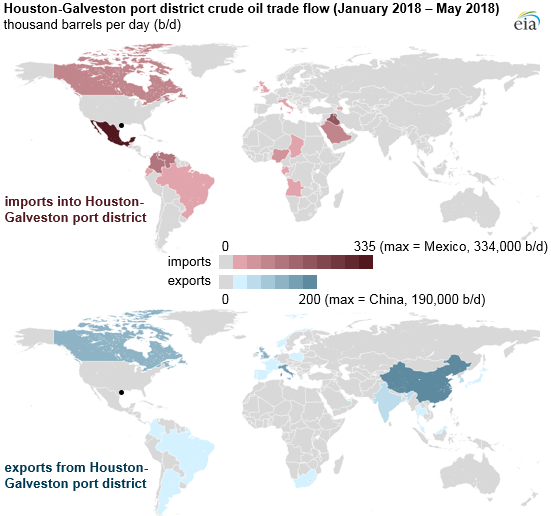 Crude oil that is imported into the Houston-Galveston port district mainly comes from Mexico, South America, and the Middle East. These regions generally produce and export heavier grades of crude oil to the United States, and refineries in U.S. Gulf Coast are better configured to process heavier crude oil. The types of crude oil that are exported tend to be the lighter grades that are produced in the United States and shipped mainly to Europe and Asia.