Technical analyst Clive Maund discusses why he believes the stock of a small oil and gas company actively exploring in West Texas is at a "near perfect entry point."

It's been a long wait for many investors in Torchlight Energy Resources Inc. (TRCH:NASDAQ), but it looks like the wait will soon prove to have been worth it, as the prospects for the company and the stock now look better than ever. While we are going to concentrate on the technical picture for the stock, as usual, you can read about the improving fundamental situation for the company in "Energy Firm's Early Test Well Results 'Very Positive'" and also in "Torchlight Illuminate a New Texas Oil Basin" and in "Why Four Wall Street Experts Are Recommending This Oil Stock." Not surprisingly, this plethora of upbeat articles on the company right after the positive drill results helped drive a spike in the stock, so we figured that it would react back to a better price once the excitement died down a bit, and that is just what it has done, and it is considered to be at a near perfect entry point here.

On the latest 6-month chart we can see how the positive drill results and ensuing publicity drove the stock sharply higher on big volume, which was bullish. The sudden spike in the price inevitably brought out selling by some jaded long-time holders of the stock causing it to react back just as we expected, but now it has stabilized at support at $1.12 and a little above, and is believed to be ready to turn higher again—and on the next advance there will be less overhanging supply to contend with so it should get further, and take out the resistance level shown. Now we will proceed to examine the longer-term 4-year chart on which we will quickly see that a MUCH bigger move is in prospect for Torchlight that will make last week's spike higher look like a minuscule blip, which is actually all it was in the larger scheme of things. 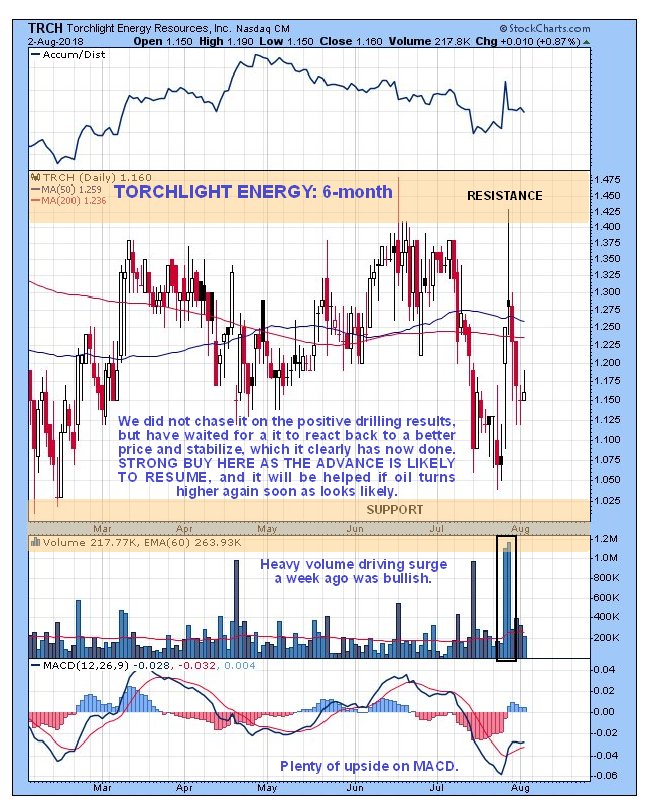 On the 4-year chart we see that the time is nigh for a really big move in Torchlight, which has been languishing in a huge Triangle since mid-2015, or for 3 years now. With this Triangle now rapidly closing up, it is clear that this move is imminent, and with things going so well for the company the likelihood is that the breakout will be to the upside, and it may be helped by another upleg in oil. After a buildup like this we can expect to see a big runup in the event of an upside breakout from the Triangle and the resistance shown near to the top of it. Note the persistent strength of the volume indicators, which is another strong bullish indication. After the dip of recent days we may be at an optimum entry point here, on what may well turn out to be the last dip before a major advance. 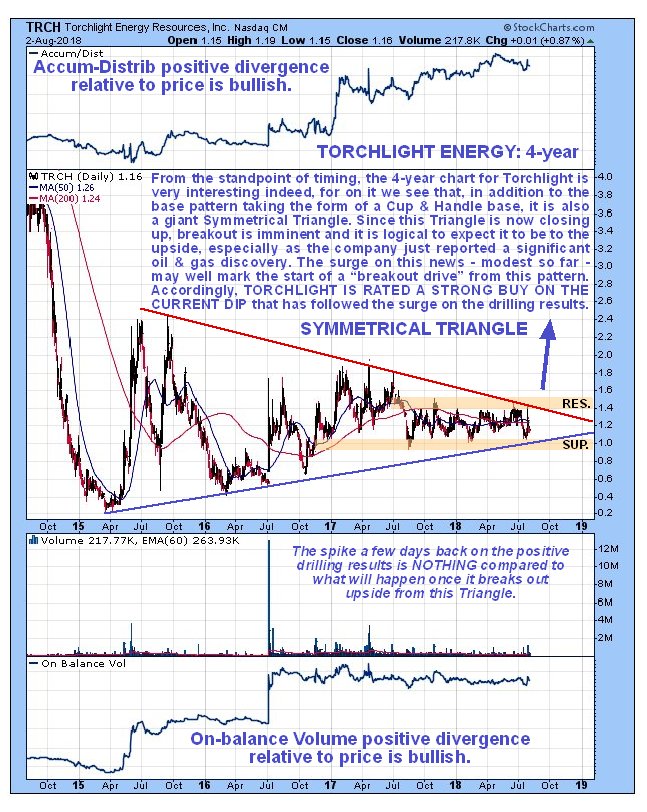 On the long-term 9-year chart, which shows the entire history of the stock, we can see that, in addition to being a Symmetrical Triangle, the base pattern also has the form of a giant Cup & Handle base that looks mature, with the Handle of the pattern looking proportionate to the Cup and like it is complete. 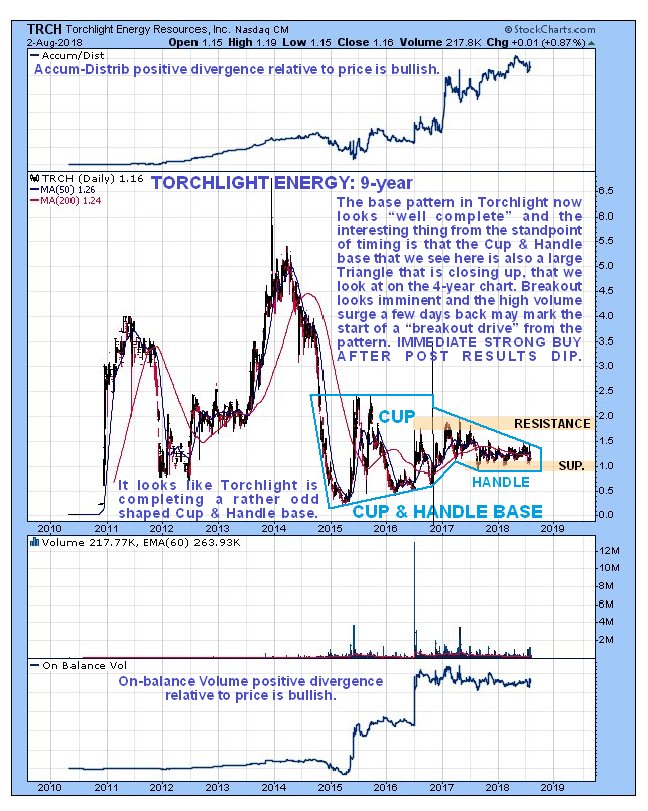 Conclusion: Torchlight is believed to be at an optimum entry point here after its dip of recent days as it is in position to start a major bull market advance, and is therefore rated a strong buy, and anyone holding should of course stay long.