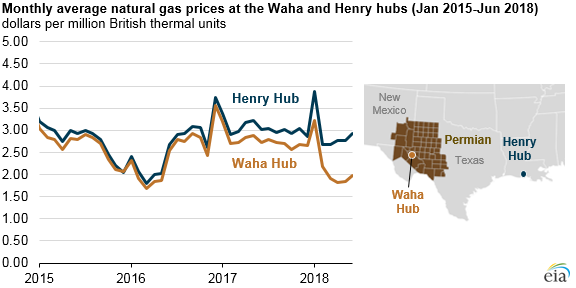 The natural gas spot price spread between the Permian Basin, as priced at the Waha Hub in western Texas, and the U.S. national benchmark Henry Hub in Louisiana has grown considerably in the past year. Natural gas prices at Waha are nearly a dollar per million British thermal units (MMBtu) lower than Henry Hub prices. This spread widened as the ability to transport the increased natural gas production in the Permian Basin in western Texas and southeastern New Mexico was constrained by existing pipeline capacity.

Producers may flare or vent the natural gas, although these disposal methods are regulated in Texas and New Mexico. Both states allow flaring from wells during drilling and immediately after completion. However, after a certain amount of time, producers can only flare natural gas after receiving exemptions from a state agency. If natural gas production continues to grow, and natural gas prices continue to fall, some producers in the area may cease oil production to avoid producing associated natural gas.

Two pipelines—Comanche Trail and Pecos Trail—were completed in 2017 to export Permian natural gas to Mexico. Although these pipelines have a combined takeaway capacity of 2.6 Bcf/d, they are not expected to see significant flows until late 2018 or early 2019 when downstream pipeline infrastructure in Mexico enters service. The only other project expected to come online in 2018 is the combined expansion of the North Texas Pipeline and resumption of service on the Old Ocean Pipeline, which collectively will increase pipeline capacity out of the Permian by 0.15 Bcf/d. 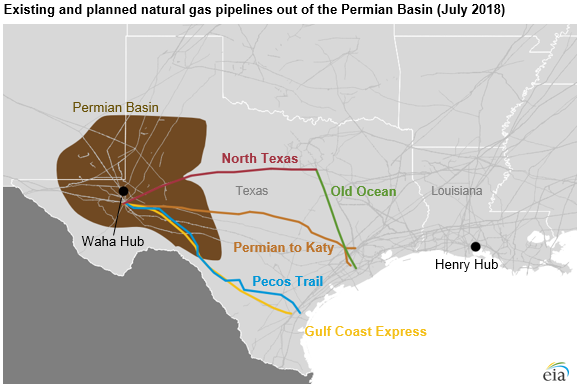