Robotic Drilling - Change the Face of Onshore and Offshore Operations

The increased drilling activities due to the development of unconventional hydrocarbon resources and the adoption of automation and robotics in oil and gas drilling, which results in higher efficiency drilling and improved safety in rigs will drive robotic drilling industry in the coming year. The global robotic drilling market was valued at USD 615.3 Million in 2017 and is expected to grow at a CAGR of 7.01% during the forecast period, to reach USD 923.2 Million by 2023. 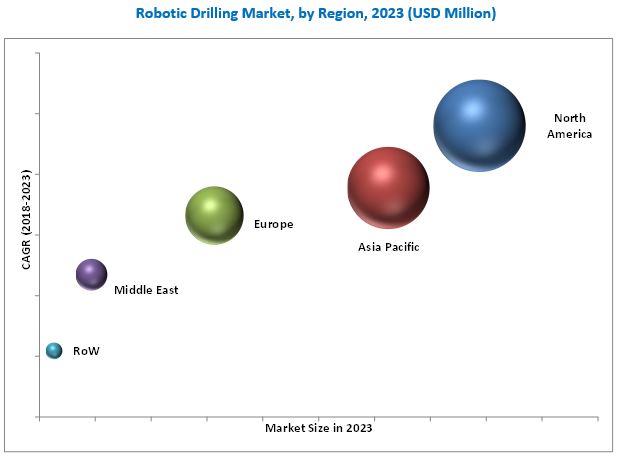 The research study of robotic drilling further segmented into the application, and installation

The application is classified into into onshore and offshore. The onshore segment accounted for a larger market for robotic drilling, based on application, in 2017. Globally ~70% of the oil and gas production takes place at onshore oil and gas fields. These fields require less capital investment in comparison with offshore fields and the costs related to automation in these fields are relatively low. Formations in onshore wells are more stable during the drilling process than those in offshore; therefore, the adoption of automation in such areas is faster for improving the drilling efficiency. The market for onshore robotic drilling systems is expected to grow at a significant rate in the coming years. The US and China with vast onshore reserves present ample opportunities for the providers of onshore robotic drilling systems.

The installation is classified into new builds and retrofit. The retrofit segment is expected to be the fastest-growing market due to the rising requirement to improve safety and efficiency of existing rigs and increasing focus on less human intervention during the drilling process.

Artificial Intelligence: Improving Efficiency and Reducing Downtime Have Been an Answer for Oil and Gas Companies

An Increased number of oil & gas leakages in production, pipelines, and storage tanks due to natural disasters and high pressure along with stringent government regulations for pipeline safety and security and expansion and upgradation of pipelines will drive the Pipeline Monitoring Systems in the c ...

Strategies and Initiatives to Improve the Quality of Drilling Waste Management