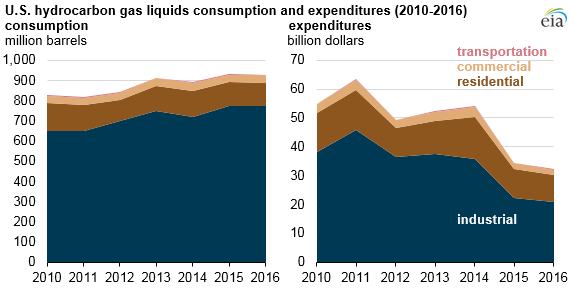 The Texas and Louisiana industrial sectors dominate HGL consumption, expenditures, and price formation in the United States. The two states combined to account for about 75% of total U.S. HGL consumption and 58% of total U.S. HGL expenditures in 2016, almost all of which was in the industrial sector. The HGL pricing hub in Mont Belvieu, Texas, heavily influences the prices of HGL products across the nation.

EIA's State Energy Data System (SEDS) recently published a new categorization of petroleum products with annual state-level estimates of HGL consumption, prices, and expenditures by end-use sector for 1960 through 2016. HGLs include natural gas liquids (ethane, propane, normal butane, isobutane, and natural gasoline) and refinery olefins (ethylene, propylene, normal butylene, and isobutylene). Almost all HGLs not used as refinery and blender inputs are consumed exclusively in the industrial sector, with the exception of propane, which is consumed in all sectors.

The industrial sector is the largest consumer of HGLs in the United States, accounting for about 83% of total U.S. HGL consumption in 2016. Industrial consumption of HGLs is primarily for feedstocks in the production of intermediate organic chemicals such as ethylene and propylene, which are used to make plastics and resins.

The residential sector, the second-largest HGL-consuming sector, is the only sector to decrease consumption between 2010 and 2016. Residential sector HGL consumption, primarily consumer-grade propane for space heating, water heating, and cooking, was 112 million barrels in 2016, a 19% decrease from 2010.

The commercial sector and the transportation sector consume relatively small amounts of HGLs, accounting for 4% and 1% of total HGL consumption, respectively, in 2016. The commercial sector consumes propane as a heating fuel, and the transportation sector uses propane for fueling alternative-fueled vehicles, such as propane-fueled police cars and school buses. 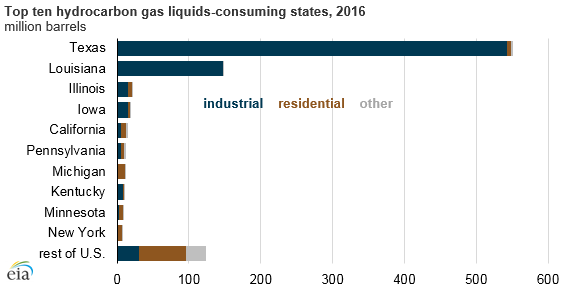 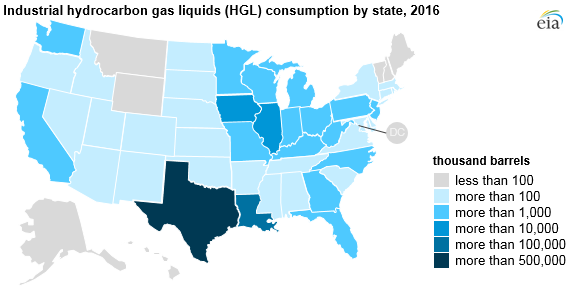 The next largest HGL-consuming states are Illinois and Iowa, consuming 21 million and 19 million barrels, respectively, in 2016. Only five states—Texas, Louisiana, Illinois, Iowa, and Kentucky—have ethylene crackers that consume ethane as a feedstock. 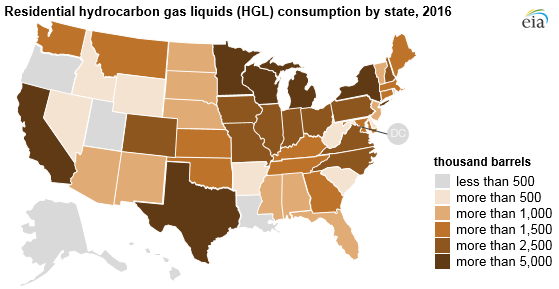