The Fed Is Driving Down Oil Prices

The U.S. dollar has jumped to its strongest level in nearly a year, raising questions about how a strong greenback could act as a drag on debt and oil demand in much of the world.

The U.S. Federal Reserve announced another rate hike a few days ago, which helped edge up the dollar to a new high for the year.

The greenback has “a little room to run,” Kathy Jones, a New York-based chief fixed-income strategist at Charles Schwab, said in a Bloomberg interview. “We have seen softer numbers out of Europe and firmer numbers out of the U.S.” The U.S. Federal Reserve is unwinding its extraordinary monetary intervention after a decade of near-zero interest rates. The Fed has announced quarter-point interest rate hikes twice and is planning on at least two additional increases this year.

Meanwhile, the European Central Bank is heading in the other direction in an effort to keep sovereign bond yields from spiraling out of control, particularly after the recent political turmoil in Italy unnerved bond markets on the continent. The ECB said it would keep interest rates low through at least next summer.

The diverging policy paths for the two central banks points to a further strengthening of the dollar relative to the euro. The Bloomberg Dollar Spot Index jumped to 1,187 in early trading on Friday, the highest level since July 2017. The greenback has strengthened about 6 percent in the past two months. 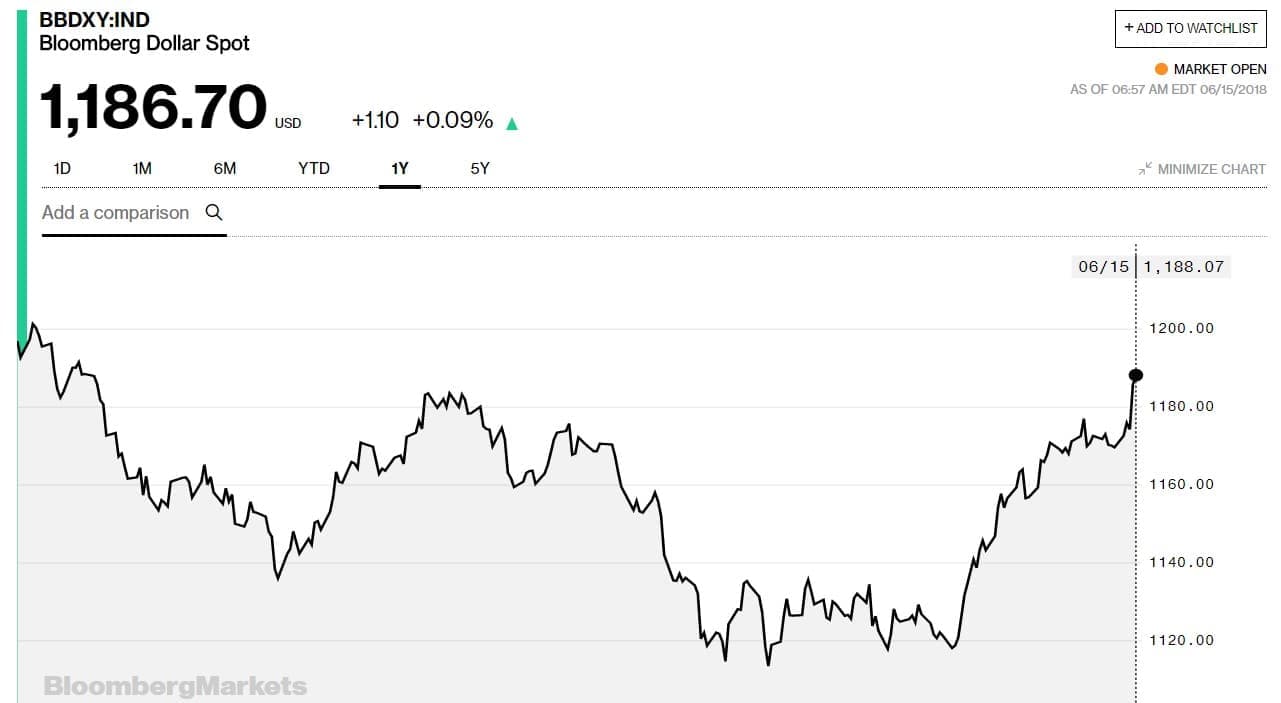 “(ECB President Mario) Draghi came out a little bit more dovish than people thought he was going to be. And that really caused the euro to take a dip and the (U.S.) dollar to go up, which is putting downward pressure on prices,” Phil Flynn, analyst at Price Futures Group in Chicago, told Reuters.

There are plenty of factors influencing oil prices right now, and the OPEC+ decision expected in a few days will be the single most important driver in the near-term. But the U.S. dollar is one important variable influencing oil prices. A stronger dollar helps push down prices because it makes oil, which is priced in dollars, much more expensive in much of the world.

Moreover, emerging markets now account for a majority of oil demand, and nearly all of the growth in oil demand. More specifically, additional consumption over the next few decades is expected to overwhelmingly come from China and India. In 2018, the two countries have accounted for nearly 70 percent of oil demand growth.

As a result, actions from the Fed reverberate through the oil markets. Higher oil prices act as a drag on demand, but a stronger greenback magnifies the expense in local currency.

Some governments are desperate to shield their economies from higher prices. As Reuters notes, the price of a liter of diesel in India is up 27 percent from a year ago, which, while costly, is actually subdued given the 70 percent increase in Brent prices over that time period. The Indian government is stepping in to blunt the impact of higher fuel prices, at great expense to public coffers.

The IEA said last week that oil demand is set to grow by 1.4 million barrels per day (mb/d) in each of 2018 and 2019, although that forecast was vulnerable to several potential pitfalls. “Of course,there are downside risks: these include the possibility of higher prices, a weakening of economic confidence, trade protectionism and a potential further strengthening of the US dollar,” the IEA wrote.

We have already seen some flashpoints flare up this year as a result of both higher fuel prices and currency problems, and while there are always multiple causes to such events, the strength of the U.S. dollar cannot be discounted. In Argentina, the peso lost nearly a quarter of its value relative to the dollar, forcing the government to seek a financial rescue from the IMF. In Brazil, crippling protests over high fuel prices paralyzed the country – prices were particularly painful for the truckers staging the strikes because Brazil's currency lost nearly 15 percent of its value relative to the dollar, exacerbating the rise in oil prices.

“Currency risks are also mounting for several emerging market economies and some OECD countries,” the IEA wrote in its report. “For example, between the start of April and the end of May, the Argentinian peso has depreciated by 24% versus the US Dollar, the Brazilian real by 12.6%, the Mexican peso by 9.7%, the Russian ruble by 9.2%, the Turkish lira by 14.4%, the South African rand by 7.3% and the euro by 5.4%.”

This currency turmoil threatens oil demand growth. “These depreciations forced some countries to increase interest rates to defend their currency, which could weigh on growth in due course,” the IEA concluded.

The Saudi Dilemma: To Cut Or Not To Cut

By Irina Slav for Oilprice.com To cut and push up prices or not to cut and preserve market share, this is the question that Saudi Arabia is facing ahead of this year's December OPEC meeting. It seems like just yesterday when OPEC met in 2016 and decided to cut production by 1.8 million barrels d ...

Can We Expect A Major Rebound In Oil Prices?

By Nick Cunningham of Oilprice.com After declining by more than 20 percent from the October peak, oil prices are showing some signs that they have now bottomed out. WTI hit a low point at $56 per barrel on Wednesday and Brent hit a low just below $65 per barrel. Both crude benchmarks regained s ...

U.S. Shale Has A Glaring Problem

By Nick Cunningham of Oilprice.com Oil prices are down a bit, but are still close to multi-year highs. That should leave the shale industry flush with cash. However, a long list of U.S. shale companies are still struggling to turn a profit. A new report from the Institute for Energy Economic ...