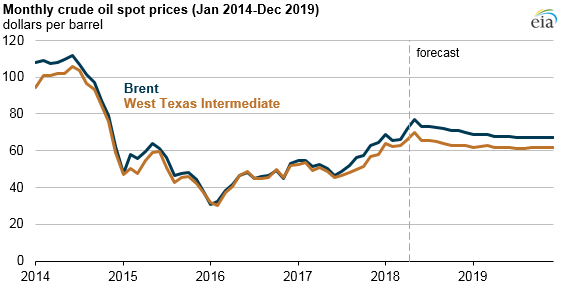 Tight oil production in the Permian region of West Texas and New Mexico is the main driver of rising U.S. production. Among other countries outside of the Organization of the Petroleum Exporting Countries (OPEC), Canada and Brazil are also expected to experience significant growth in oil production in 2019.

EIA expects that OPEC crude oil production will average 32.0 million b/d in 2018, a decrease of about 0.4 million b/d from the 2017 level. Total OPEC crude oil output is expected to increase slightly in 2019 to an average of 32.1 million b/d. The 2018 and 2019 levels are 0.2 million b/d and 0.3 million b/d lower, respectively, than forecast in the May STEO, reflecting revised expectations of crude oil production in Venezuela and Iran. The lower OPEC forecast is one of the main reasons EIA expects oil prices to be slightly higher in 2019 compared with last month's forecast.

OPEC, Russia, and other non-OPEC countries will meet on June 22 to assess current oil market conditionsassociated with their existing crude oil production reductions. Current reductions are scheduled to continue through the end of 2018. Oil ministers from Saudi Arabia and Russia have announced that they will re-evaluate the production reduction agreement given accelerated output declines from Venezuela and uncertainty surrounding Iran's production levels.

In the June STEO, EIA assumes declining Venezuelan and Iranian crude oil production in 2019 will be offset by increasing production from Persian Gulf producers, primarily Saudi Arabia. Depending on the outcome of the June 22 meeting, however, the magnitude of any supply response is uncertain. Overall, EIA expects global oil production to increase by almost 2.0 million b/d in 2019 compared with forecast oil demand growth of 1.7 million b/d.