Although U.S. gasoline product supplied and gross exports together are estimated to be about 2% higher so far this year compared with 2017, U.S. gasoline inventories have remained higher than their previous five-year averages for most of 2018. Higher inventories have affected gasoline's value relative to distillate and gasoline's value relative to crude oil (known as the crack spread). The RBOB-Brent crude oil crack spread averaged 34 cents/gal in April and 35 cents/gal in May. The last time the RBOB-Brent crude oil crack spread was lower for either month was in 2012. 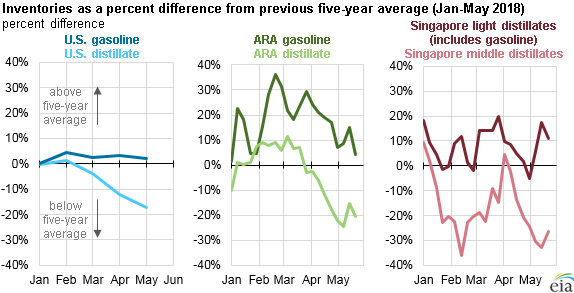