Global petroleum inventories declined through 2017 and the first quarter of 2018, marking the end of an extended period of oversupply in global petroleum markets that began before the Organization of the Petroleum Exporting Countries (OPEC) November 2016 agreement to cut production. OPEC plans to reconvene on June 22, and markets now appear more in balance, but uncertainty remains going forward.

Since the agreement took effect, global oil markets have tightened, which can be seen in the decline in crude oil and other liquids inventories following sustained increases in quarterly global liquid inventories from mid-2014 through most of 2016.

Data on global petroleum inventory levels are not collected directly, but changes in global inventories are implied based on the difference between estimates of world production and world consumption. For the United States and for countries in the Organization for Economic Cooperation and Development (OECD), however, inventory estimates are available and can indicate what is happening globally. 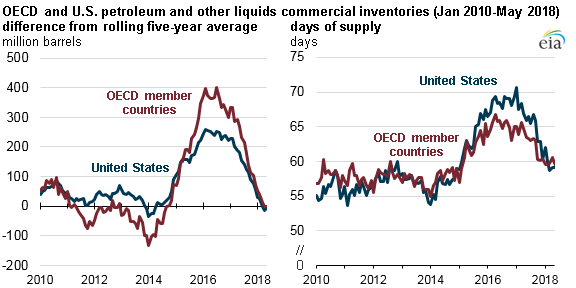 The days of supply measure (the current inventory level divided by the next month's estimated consumption) provides additional insight into market balances. Between January 2017 and April 2018, U.S. and OECD crude oil days of supply fell by 11.5 and 4.5 days, respectively, to 59.2 and 60.6 days. Even as this supply measure has declined, current levels are still slightly higher than levels held for several years before 2015.

U.S. and OECD days of supply are forecast to remain close to their previous five-year average levels through 2019. However, additional uncertainty about future global oil market balances remains in light of, among other factors, the U.S. withdrawal from the Joint Comprehensive Plan of Action (JCPOA) and continued political instability in Venezuela.