The winners of Iraq's latest bid round will need to keep costs low to achieve competitive returns compared to previous contracts, according to GlobalData, a leading data and analytics company.

The country's first round since 2012 closed on April 26, with most major E&Ps staying away and only 6 of the 11 available blocks awarded. Companies were given less than two weeks to evaluate terms, a fact that has been cited as a reason for the lacklustre response.

Under the new model, contractors will reportedly pay a 25% royalty on gross production, then recover their costs and split the remainder with the government according to the net revenue bid. The service fees payable to contractors under the previous service contracts, comprising cost recovery and remuneration fees, were capped at 50% of revenue, effectively imposing a 50% royalty.

Will Scargill, Oil & Gas Analyst at GlobalData comments, “If the lower royalty allows contractors to recover their costs more quickly, this should improve rates of return, but the key aspect determining profitability will be the value of the net revenue share.” 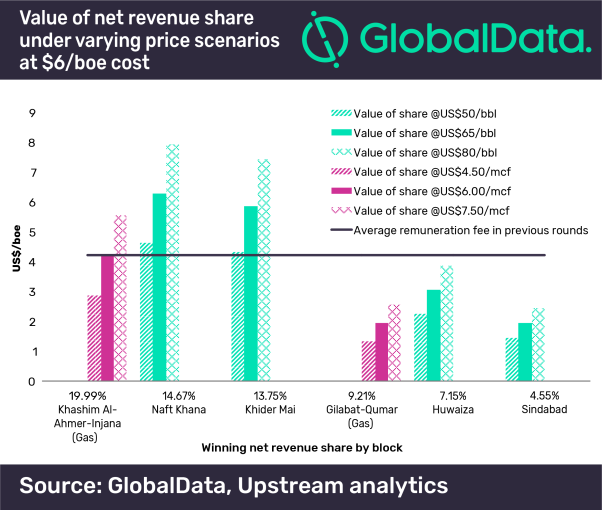 The winning net revenue share bid varied significantly by block, ranging from 19.99% to 4.55%. In contrast to the dollar-denominated remuneration fees, its value will ultimately be a function of commodity prices and costs. The desire to encourage cost efficiency was in fact the primary rationale behind the government's change to the contract model, as it reasoned that previously the cost recovery mechanism combined with an R-factor (the ratio of cumulative revenues and costs) adjustment incentivized higher costs.

Assuming a total cost of $6 per barrel of oil equivalent (boe) for both capital expenditure (capex) and operating expenditure (opex), based on the average cost of recent developments in Iraq, the highest three winning bids for net revenue share should have a value at or above the average remuneration fee set in existing contracts. However, in those blocks where companies bid more aggressively the share yields a value similar to the lowest remuneration fees set for Iraq's giant fields.

Scargill adds: “In order to achieve competitive margins, operators will need to drive down costs below the average, a task which may prove challenging at smaller developments, or hope for higher oil prices.”