Over $180bn Will be Spent on 88 Upcoming Oil and Gas Fields in Africa to 2025, Says GlobalData

Over $180bn will be spent on 88 upcoming oil and gas fields between 2018 and 2025. Capital expenditure (capex) into Africa's conventional oil, heavy oil and unconventional oil projects will add up to $88bn, $2bn and $3bn respectively over the eight-year period, according to GlobalData, a leading data and analytics company. 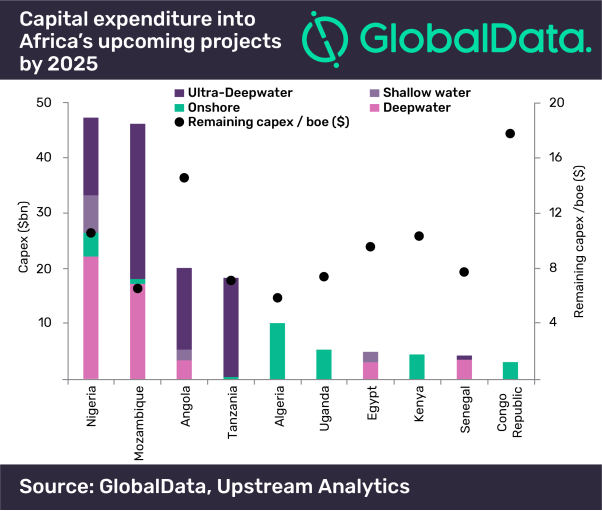 Peter Heath, Oil & Gas Analyst at GlobalData, comments: “Nigeria will lead the way with $47.2bn or over 26 percent of $180bn of capex between 2018 and 2025, and has 23 accounted and planned fields. Among these, the top fields in terms of capex for the period are Zabazaba-Etan with $11.1bn, Bonga North with $8.4bn and Bonga Southwest/Aparo with $3.9bn.”

Mozambique follows with $46.2bn or approximately 25 percent share in Africa's planned and announced capex over 2018 and 2025 and has seven planned and announced fields. Deepwater Golfinho-Atum Complex, two ultra-deepwater fields Mamba Complex and Coral South are the top three fields with capex for the eight-year period of $17.1bn, $15.0bn and $6.8bn respectively. All three are conventional gas developments.

Angola is expected to contribute $20.0bn or an estimated 11 percent to the total capex spending between 2018 and 2025. The country has six planned and announced fields. The top three fields are Orca, Kaombo Complex and Lucapa, with capex of $7.1bn, $5.1bn and $3.4bn, respectively.

Tanzania, Algeria, Uganda, Egypt, Kenya, Senegal and Congo Republic have a combined forecast capex of $50bn, or approximately 28 percent of the total capex spending on upcoming projects in Africa for the period. GlobalData expects that over their lifetime, the 88 upcoming oil and gas projects will require $384bn in capex to produce over 12,356 million barrels of crude and 178,209 billion cubic feet of gas.