Source: U.S. Energy Information Administration, based on Digest of U.K. Energy Statistics and National Statistics: Energy Trends
Note: 2017 values are estimates based on data through September. 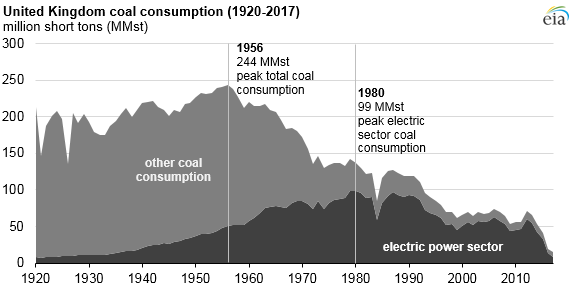 Source: U.S. Energy Information Administration, based on Digest of U.K. Energy Statistics and National Statistics: Energy Trends
Note: 2017 values are estimates based on data through September.

As industrial, railroad, and residential use of coal decreased, consumption of coal by the electric power sector increased, peaking at 99 MMst in 1980. Coal consumption in the electric power sector began a steep decline in 2013. Several factors contributed to the decline, including the implementation of the U.K. Carbon Price Floor (CPF), which increased the cost of carbon emissions for electric generators.

The United Kingdom's CPF works in combination with the European Union's Emissions Trading System (EU ETS). If the EU ETS carbon price is lower than the U.K. CPF, electric generators have to buy credits from the U.K. Treasury to make up the difference. The CPF applies to both generators that produce electricity for the grid and companies that produce electricity for their own use. 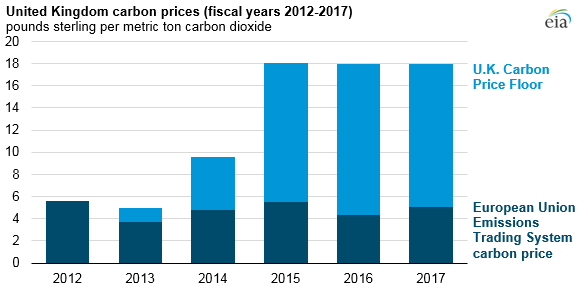