With the Atlantic Margin of Africa firmly positioned on a steeply rising limb of the creaming curve, Sierra Leone's 4th Offshore Licensing Round offers explorers the opportunity to enter into an emerging petroleum province at a favorable time, though changes to Sierra Leone's fiscal terms make the nation less competitive than it used to be, which may put the round at risk, according to GlobalData, a leading data and analytics company.

Currently, only African Petroleum and European Hydrocarbons Limited hold licensed blocks in Sierra Leone. These blocks, SL-4A-10 and SL-03, have recently entered into their second extension period, expiring in November 2018, or in September 2019 if the operator commits to drill one well in each by the end of 2019. As such, the 4th Offshore Licensing Round offers Sierra Leone the opportunity to expand its upstream sector. 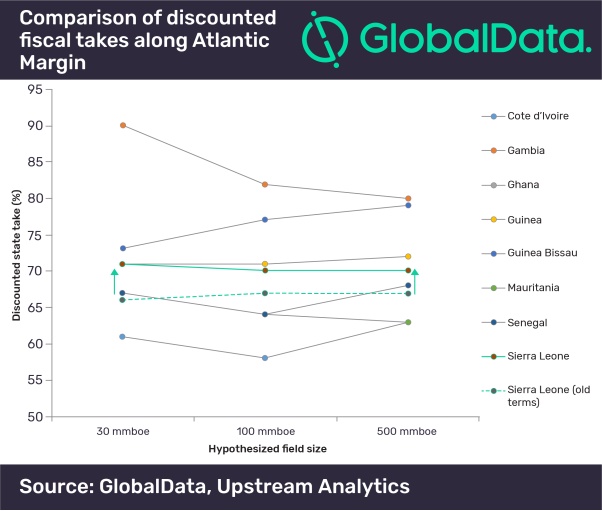 Discounted state take (percentage) for Sierra Leone, old and new terms, has been modelled for hypothesized fields of different sizes and compared with the fiscal regimes of neighboring countries: Mauritania, Senegal, The Gambia, Guinea-Bissau, Guinea, Cote d'Ivoire, and Ghana. Sierra Leone ranks 4th compared to the neighboring countries, with discounted state takes of between 70 percent and 71 percent. This compares to state takes of 58 percent to 90 percent for the selected peer group of countries. Terms offered under the 4th Offshore Licensing Round have increased Sierra Leone's discounted state take by 3-4 percent relative to previous rounds, reducing Sierra Leone's competitive edge within the Atlantic Margin region.

To date, the mean recoverable reserves for fields across the entire west coast of Africa stands at 197 million barrels of oil equivalent (mmboe), with the region displaying a typical field size distribution. Against this backdrop, Sierra Leone and its immediate neighbors are underexplored, leaving a reasonable possibility that considerable volumes of yet-to-find hydrocarbons remain.

Considerable subsurface data already exists over much of the Sierra Leone offshore, including well, 2D and 3D seismic reflection data, and gravity-magnetic data. The minimum work terms defined by the Petroleum Directorate of Sierra Leone have been set so that data acquired as a result of future licensing compliments and enhances the national data repository. Strict timescales must be adhered to by operators, with exploration license extensions conditional on agreed exploration works being completed in a timely manner.