U.S. Gulf of Mexico Crude Oil Production to Continue at Record Highs Through 2019 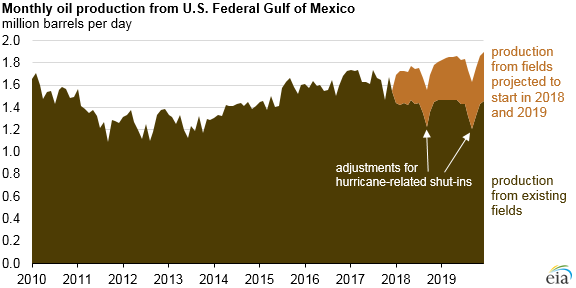 Based on STEO's expected production levels at new fields and existing fields, annual crude oil production in the GOM will increase to an average of 1.7 million b/d in 2018 and 1.8 million b/d in 2019. However, uncertainties in oil markets may still affect long-term planning and operations in the GOM, and the timelines of future projects may change accordingly.

Because of the amount of time needed to discover and develop large offshore projects, oil production in the GOM is less sensitive to short-term oil price movements than onshore production in the Lower 48 states. In 2015 and early 2016, decreasing profit margins and reduced expectations for a quick oil price recovery prompted many GOM operators to pull back on future deepwater exploration spending and to restructure or delay drilling rig contracts, causing average monthly rig counts to decline through 2017. 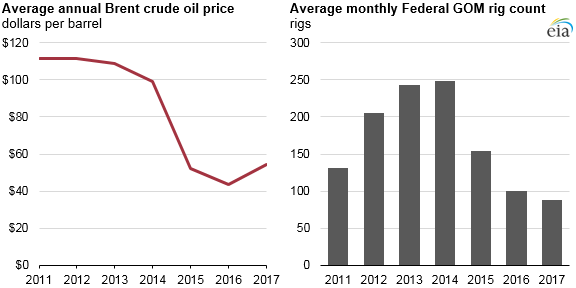 Recent crude oil price increases have not yet had a significant effect on operations in the GOM, but they have the potential to contribute to increasing rig counts and field discovery in the coming years. Unlike onshore operations, falling rig counts do not affect current production levels, but instead affect the discovery of future projects and fields.

In March 2018, the Bureau of Ocean Energy Management held a lease sale for more than 14,000 Federal Gulf of Mexico blocks, most of which did not receive any bids. Although the results of this auction will not affect GOM production within the Short-Term Energy Outlook forecast horizon (through 2019), the level of interest for leases may have longer-term implications for GOM crude oil production. 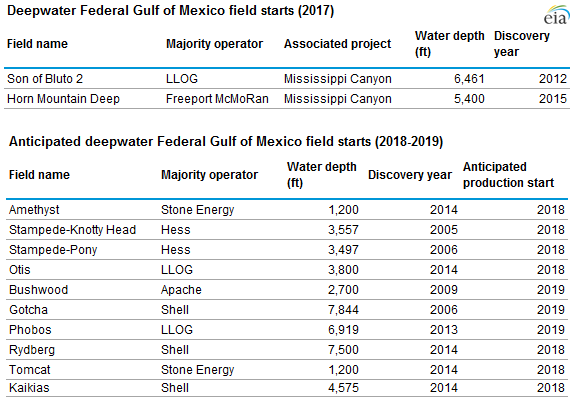