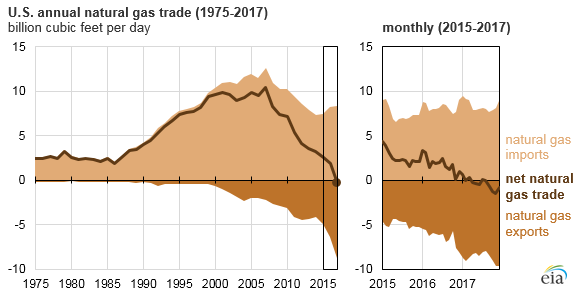 As the United States has produced more natural gas, particularly from the Appalachia region, pipeline imports from Canada have decreased. As new pipeline capacity comes online in the region, more natural gas can be delivered to regions in the Midwest and Northeast, displacing Canadian imports and increasing U.S. pipeline exports to Canada.

U.S. LNG exports increased dramatically over the past two years as new liquefaction capacity has come online. The only liquefaction terminal previously operating in the United States—the Kenai LNG terminal in Alaska—ceased operations in 2015. In 2016, as the Sabine Pass LNG terminal in Louisiana began to ramp up operations, U.S. LNG exports increased. Sabine Pass now has four operating liquefaction units, with a fifth currently under construction.

The Cove Point LNG facility in Maryland exported its first LNG cargo on March 1, 2018. Cove Point is the second currently operating LNG export facility in the United States, after Sabine Pass. Four other LNG projects are under construction and expected to increase U.S. liquefaction capacity from 3.6 Bcf/d to 9.6 Bcf/d by the end of 2019, further increasing U.S. natural gas exports.

EIA's Short-Term Energy Outlook projects that the United States will be a net exporter of natural gas in each month remaining in 2018 and each month of 2019 as pipeline exports to Mexico continue to grow along with LNG export capacity.