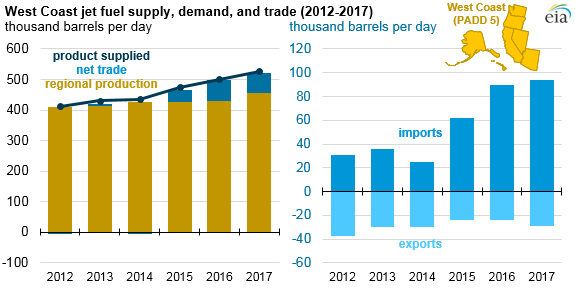 Net imports of jet fuel into the West Coast (defined as Petroleum Administration for Defense District, or PADD, 5) have increased in recent years as regional jet fuel consumption has outpaced production. States in the West Coast region—those bordering the Pacific Ocean plus Nevada and Arizona—make up about 20% of the U.S. population but account for nearly a third of U.S. jet fuel consumption. Most of these jet fuel imports have come from refineries in Asia.

West Coast jet fuel consumption increased by 6% in 2016 and by another 5% in 2017, averaging 527,000 barrels per day (b/d) through December. In particular, Alaska and Hawaii have higher per capita jet fuel use because of their remote locations, using thirteen and five times the national average, respectively. 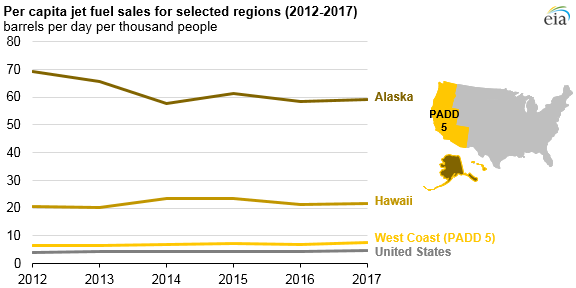 A number of factors have driven increases in jet fuel consumption since 2014. The average jet fuel price dropped to $1.53 per gallon in 2015, compared with an average price of $2.92 from 2012 to 2014, mostly because of lower crude oil prices. In addition to reduced jet fuel prices, economic and population growth since 2012 in the West Coast region have been higher than the U.S. average. 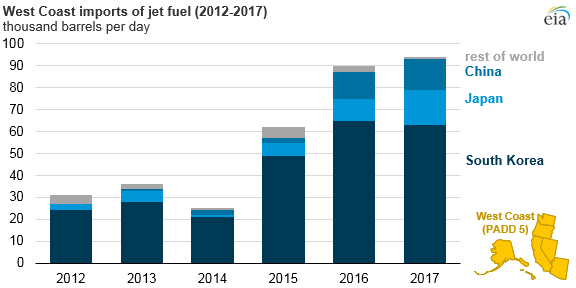