China surpassed South Korea to become the world's second-largest importer of liquefied natural gas (LNG) in 2017, according to data from IHS Markit and official Chinese government statistics. Chinese imports of LNG averaged 5 billion cubic feet per day (Bcf/d) in 2017, exceeded only by Japanese imports of 11 Bcf/d. Imports of LNG by China, driven by government policies designed to reduce air pollution, increased by 1.6 Bcf/d (46%) in 2017, with monthly imports reaching 7.8 Bcf/d in December.

China's imports of natural gas have grown to meet increasing domestic natural gas consumption, which has been primarily driven by environmental policies to transition away from coal-fired electricity generation. The Chinese government has also implemented policies to convert several million residential households in China's northern provinces, which traditionally rely on coal heating in the winter, to use natural gas-fired boilers instead.

Natural gas storage capacity in China is relatively limited, estimated at just 3% of total natural gas consumption. China's seasonal peak demand is met primarily by natural gas imports, either by pipeline from Central Asia or by shipments of LNG. Despite increases in China's domestic production and in pipeline imports in 2017, natural gas shortages in northern China led to record levels of LNG imports during the 2017 winter. Overall, natural gas imports accounted for 40% of China's 2017 natural gas supply, and LNG made up more than half of those imports. 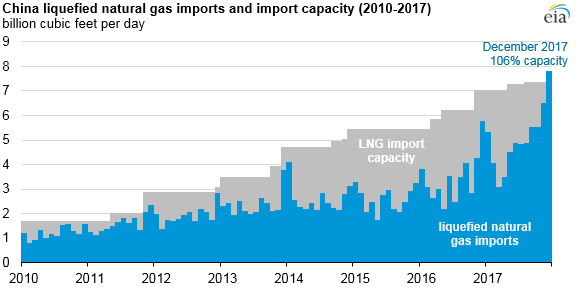 EIA expects natural gas consumption in China to continue to increase—driven by economics and environmental policies—and imports and increasing domestic production will be used to meet growing demand. China's LNG import capacity is expected to reach 11.2 Bcf/d by 2021, once capacity expansions at existing terminals and new terminals currently under construction are completed. EIA also expects China's imports of natural gas by pipeline to increase, especially as the Power of Siberia pipeline from Russia comes online by the end of 2019.

U.S. LNG exports to China increased significantly last year, from 17.2 Bcf in 2016 to 103 Bcf in 2017. China accounted for nearly 15% of U.S. LNG exports in 2017, behind only Mexico and South Korea. In November 2017, the United States and China signed several preliminary agreements for U.S. LNG exports to China, including exports from Sabine Pass on the Gulf Coast of Louisiana, the fully approved Delfin LNG offshore export project off Louisiana's coast, and the proposed Alaska LNG project. In February 2018, Cheniere Energy and the China National Petroleum Corporation signed two long-term contracts for LNG from Sabine Pass and new LNG facility under construction near Corpus Christi, Texas.