The mix of energy sources used for producing electricity generation continues to shift in response to changes in fuel costs and the development of renewable energy technologies. Since 2015, the cost of natural gas delivered to electric generators has generally averaged $3.50 per million British thermal units (Btu) or less, and it is expected to remain near this level through 2019.

Power plant operators are scheduled to bring 20 gigawatts (GW) of new natural-gas fired generating capacity online in 2018, which, if realized, would be the largest increase in natural gas capacity since 2004. Almost 6 GW of the capacity additions are being built in Pennsylvania, and more than 2 GW are being built in Texas. In contrast, about 13 GW of coal-fired capacity are scheduled to be retired in 2018. These changes in the generating capacity mix contribute to the continuing switch from coal to natural gas, especially in southern and midwestern states. 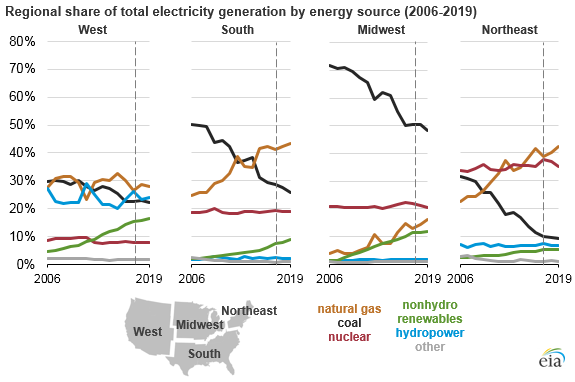 Generation from renewable energy sources other than hydropower has grown rapidly in recent years. EIA expects the average annual U.S. share of total utility-scale generation from nonhydro renewables to exceed 10% for the first time in 2019.