The Road Ahead for Oil

Technical analyst Clive Maund charts oil and suggests that a commodities bull market may be brewing.

The paradoxical technical situation for oil that we highlighted in the last update has continued—and has gotten even more extreme. In that update we concluded that oil's very bullish volume indicators pointed to its continuing to advance, despite COT and Hedgers charts and sentiment indicators showing extremes that would normally call for a reversal to the downside, and that is what has happened.

We see on the 5-year chart for Light Crude that it appears to have broken out of its large Head-and-Shoulders bottom several months ago, but its advance since then has been hesitant and we cannot be absolutely sure that it has broken clear out of this potential base pattern until it has broken clear above its 2015 highs, which is the high following the completion of the Left Shoulder of the pattern. As with copper, that we looked at just yesterday, the strong volume towards the latter part of this pattern and the powerfully rising volume indicators suggest that a major bull market is starting, however, we have the conundrum of reconciling this with various indicators which are at extremes and pointing to an imminent reversal to the downside. Action that would reconcile what we are seeing both on the charts and on various indicators would be an intermediate or medium-term correction, followed by renewed advance taking the oil price to new highs. 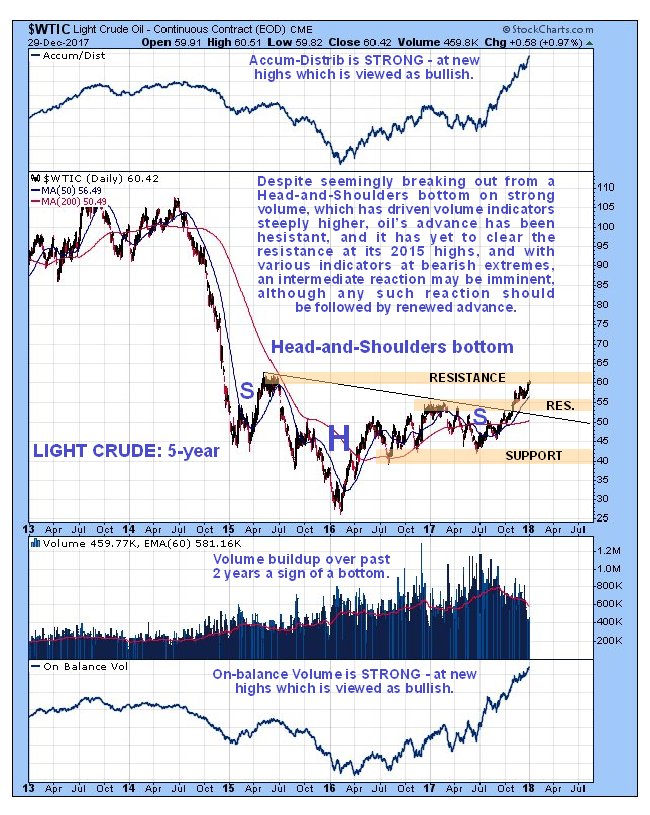 On the 2-year chart for Light Crude we can see one big reason in the price pattern why it might reverse here into an intermediate correction—it has arrived at a significant trendline target in the $60 area. 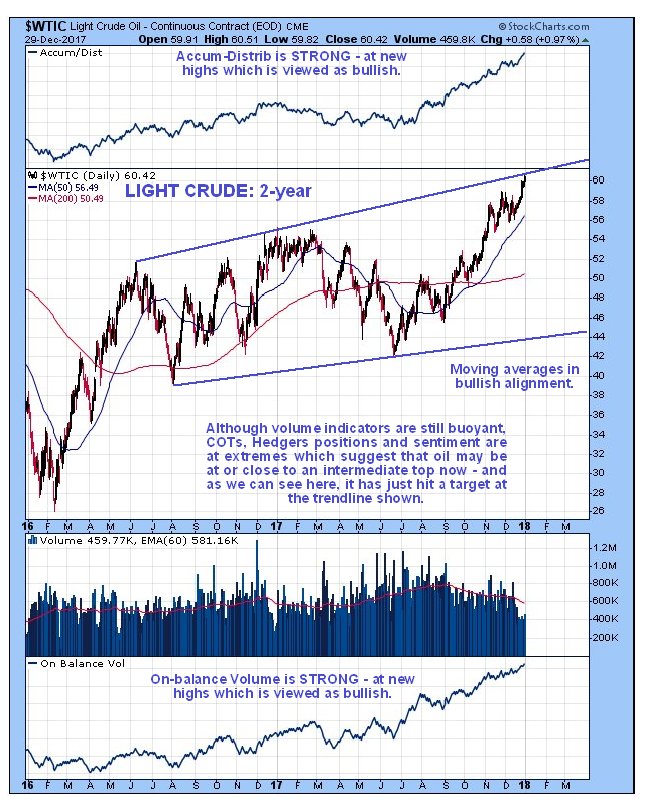 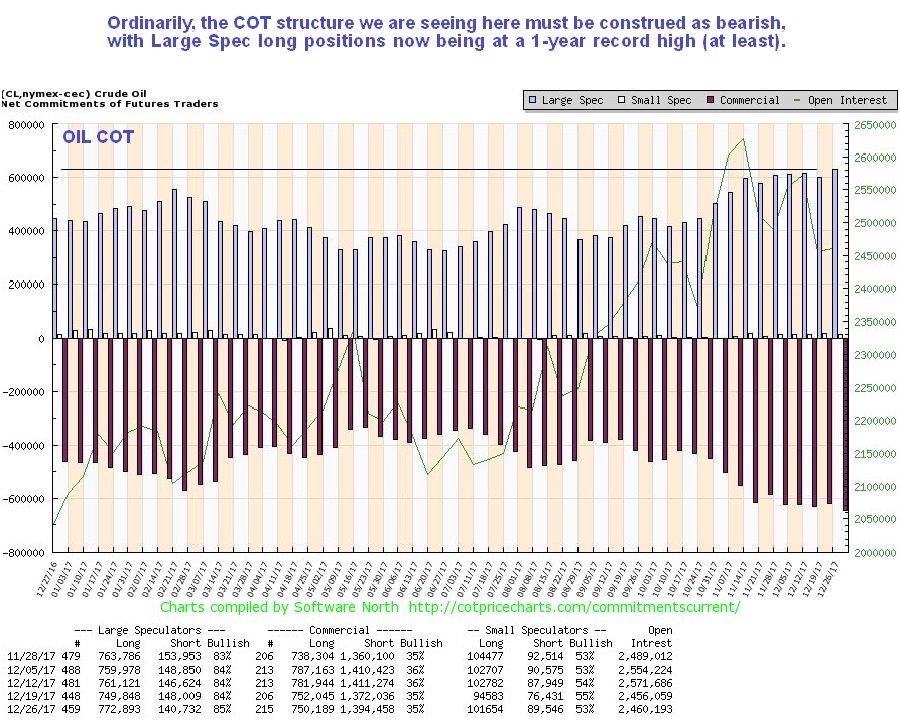 Next we move on to the latest Hedgers chart which shows that Hedgers' positions are now at shocking bearish extremes that have almost always in the past led to a reversal to the downside quite soon after, even if oil makes limited further gains first. 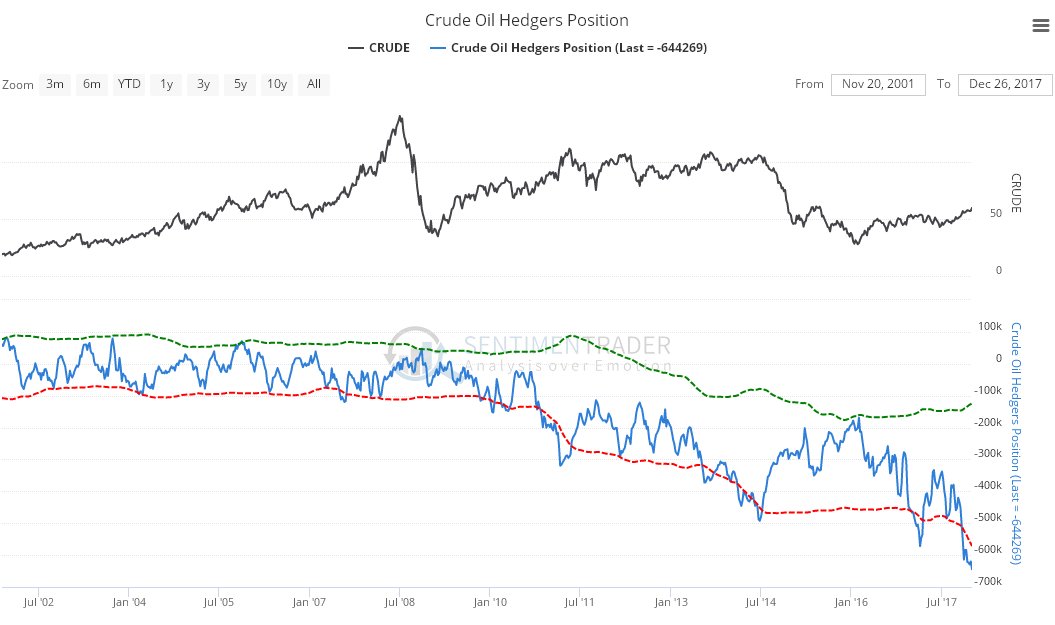 Chart courtesy of sentimentrader.com The latest Crude Oil optix, or optimism chart, shows that traders are wildly optimistic about the outlook for the oil price. At worst this is a sign of a significant top, and at best it means that a period of consolidation is usually needed before the price can advance further. 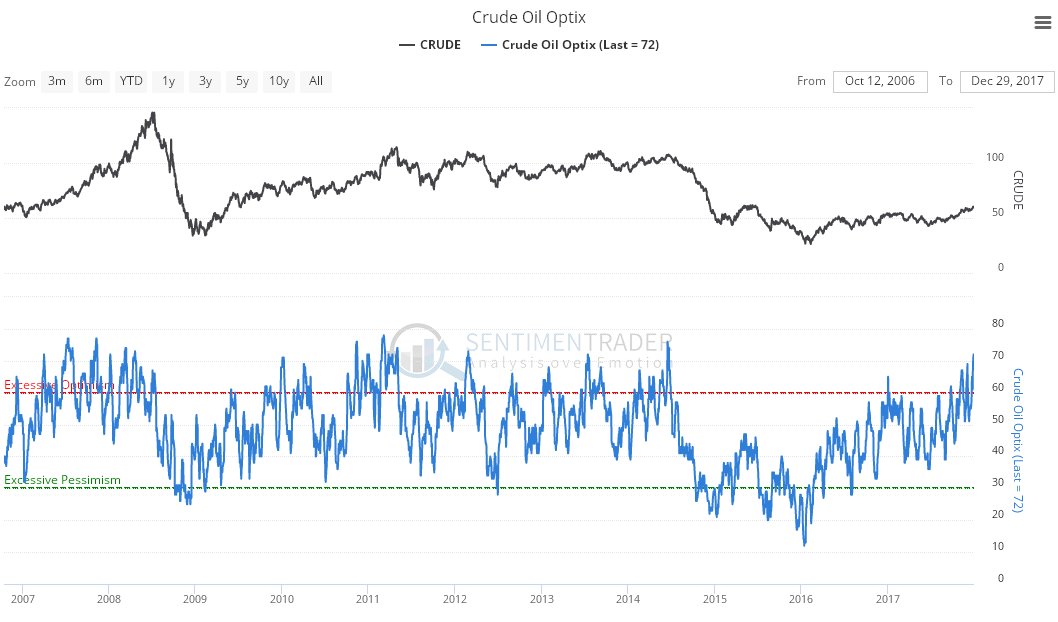 Finally, the seasonal chart for oil shows that seasonal factors are negative for this commodity in January, but much better in March and April, which supports the scenario for a near-term reaction followed by renewed advance later. 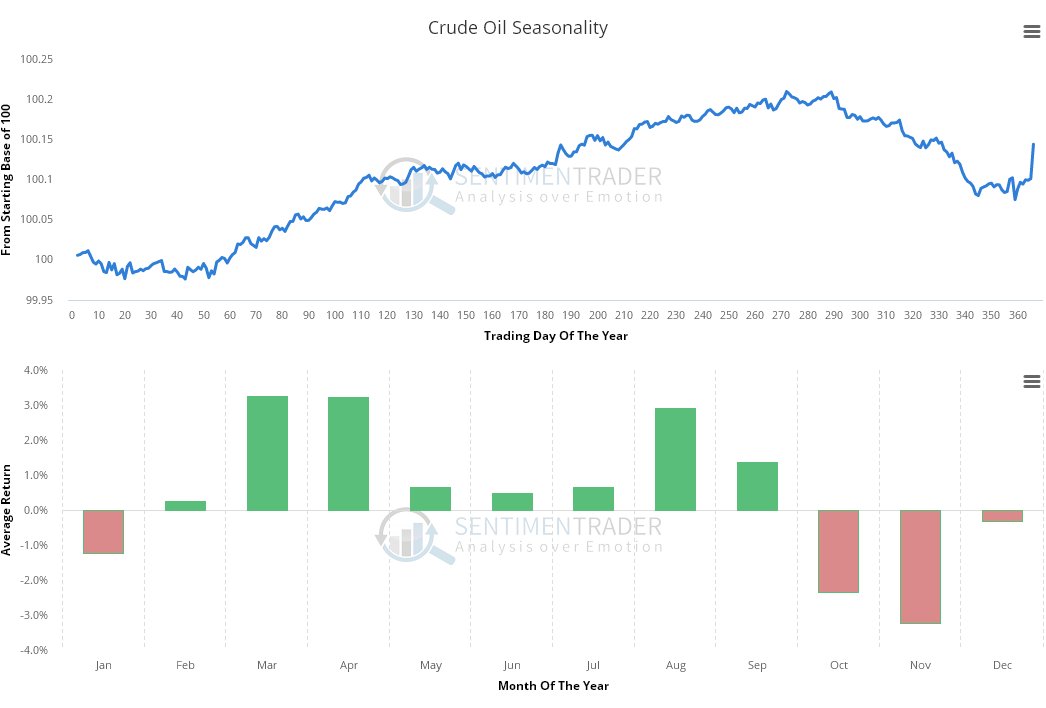 How this situation plays out now may now depend on how events unfold in Iran and what effect it has on both Iran's oil fields and its oil exports. Technically, the most probable scenario is a medium-term reaction, followed by renewed advance to new highs, which is also what the copper charts portend, and more broadly the action in both copper and oil suggests that a major commodities bull market is incubating, a big beneficiary of which will be silver.