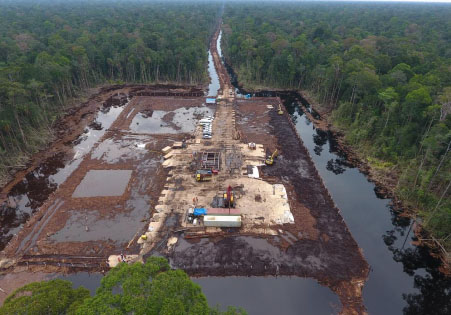 In Indonesia, regarding the East Jabung product sharing contract (PSC), Pan Orient Energy, the 49% working interest owner, and its partner agreed to drill the ANGGUN-1X well, "which holds substantial resource upside," Newman indicated. That well is "targeting an independent structural closure from that tested at AYU-1X at the Batu Raja formation level" and "the same well-developed, porous Gumai sandstones reservoir encountered in the AYU-1X well."

As for the ELOK-1X exploration well, Newman explained that it qualified as "the second commitment well, and the government of Indonesia has approved a 14-month extension (to Jan. 20, 2019) of the first exploration phase of the East Jabung PSC."

In Thailand, at the L53/48 concession, in which Pan Orient Energy owns a 50.01% working interest, Q3/17 production averaged 262 barrels of oil equivalent per day net to it. This was "in line with our forecast of 225 barrels per day," Newman noted.

Later this month, the energy company plans to spud the L53AC-C1 exploration well and finish a four-well workover project before year-end.

The research report also covered Pan Orient Energy's financial status. As of Q3/17E, the company had "a strong balance sheet and no big work commitments," Newman described. Working capital was $40.4 million ($40.4M), including $40M of cash. There was no debt.

Capital outlays in Q3/17 totaled $3.9M. Of that amount, $3.3M was spent on drilling the AYU-1X and ELOK-1X wells. Near term, the company has committed $1.9M for Indonesia's East Jabung PSC and $0.2M for Canada's Swan Lake project.

Newman reiterated Mackie's Buy recommendation and $3.25 target price "on Pan Orient Energy's strong financial position and high-impact exploration potential in Indonesia," he said. The company is currently trading at about $1.09 per share.